Iran's defense chain in PG ready to respond to any threat

TEHRAN (defapress) – Deputy Navy Commander for Coordination Rear Admiral Hamzeh Ali Kaviani said that Iran's defense chain in the south of the country is ready to respond to any threat.
News ID: 82275 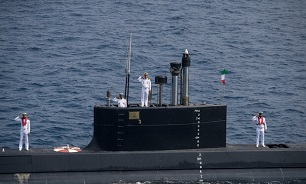 He made the remarks at the welcoming ceremony of Iran's 69th naval flotilla which returned to the southern port city of Bandar Abbas on Tuesday after a 67-day mission in the international waters.

"The presence of foreigners in the Persian Gulf is of no use to them, we declare to the enemies that Iran will respond to any threat to its waters and interests," said Kaviani.

"In order to defend the interests of the Islamic Republic of Iran, the Navy has a bold presence in international waters," he added, saying, "Security and protection of international waterways and escort of Iranian ships are among the duties assigned to the Army."

"The 69th fleet of warships of the Iranian Navy has also been successful in carrying out its orders and plans," Kaviani highlighted.

He stressed, "Our presence in the seas will be continuous and authoritative, and this presence is a continuation of the implementation of the orders of the Supreme Commander of the Armed Forces."

"On its first overseas mission, 'Sahand' destroyer set out on a mission to the Gulf of Aden and was able to emerge from its pre-determined plans successfully," he added.

Kaviani noted, "Today, the capability of Iran Navy goes beyond building a destroyer and has the authority to deliver a strong response to the United States in the face of threats."

"The Navy of Iran is present in the seas and supports the country's oil, commercial and fisheries fleet," he said.

"The 70th flotilla set sail for the high seas immediately after the return of the 69th naval flotilla on the same day," Kaviani highlighted.

The 69th fleet of warships of the Iranian Navy, comprising 'Sahand' destroyer and logistical warship ‘Bandar Abbas’, berthed at southern Iranian port city this morning and was welcomed in a ceremony attended by navy commanders and staff.

The flotilla traveled a total of 7,888 nautical miles during its overseas journey and tracked over 700 vessels, 36 of which were Iranian tankers and commercial vessels.