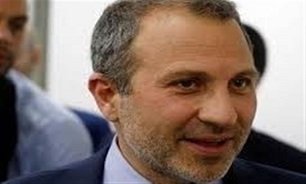 Hariri has begun consultations with the president, parliamentary speaker and Lebanese political blocs about forming a government that would implement French President Emmanuel Macron's so-called roadmap for reforms and unlock international aid.

He has said his mission was to form a six-month government of technocrats to rapidly carry out the “reform plan” set out in Macron's initiative.

"We were not aware, and nobody informed us, that President Macron had appointed a high commissioner... to Lebanon, and made a prefect for us to oversee his initiative and the extent of its implementation," Bassil said in a speech to supporters, AFP reported.

"Whoever wants to head a government of technocrats has to be a technocrat himself," said Bassil, who heads Lebanon's biggest Christian bloc, the Free Patriotic Movement.

Aoun will hold formal consultations on Thursday about nominating a prime minister to form a new government to replace Hassan Diab's cabinet, which resigned two months ago after a powerful explosion damaged much of Beirut and killed 200 people.

Diab's nominated replacement has been unable to form a government.