Navy sees arms embargo as only 'a joke

TEHRAN (defapress) – Referring to the end of Iran arms embargo, Commander of the Iranian Navy Rear Admiral Hossein Khanzadi said that Iran Navy has no need to buy weapons today, and arms embargo is considered a joke for the Navy.
News ID: 82328 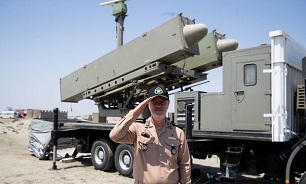 Stating that at one time Iran was in dire need of spare parts and weapons and it was looking for a country to give it torpedoes, cannons and weapons or the teach the technology of building a float, Khanzadi said, "But today, I dare say that the lifting or continuation of the arms embargo is not effective for Iran Navy because we made everything we wanted from all kinds of cannons, torpedoes and floats."

Referring to the torpedoes issue in naval weapons, he added, "Until a few years ago, we had to buy torpedoes from some countries, but with the arrival of native torpedoes and their successful testing, this need has been also completely met."

"The native Iranian torpedo, which was tested for the first time in 2017, has made considerable progress both in its range and the ability to destroy and accuracy," Khanzadi said, adding, "We even designed the caliber of the torpedoes to be tactical rather than cost-effective."

"When a prototype of a product is made in Iran Navy, it is given to the Ministry of Defense for mass production to sell if needed," Navy Commander said.

He added, "Our products are at a high level of quality and price attractiveness, and there is a very high possibility that they will be successful in competing with foreign samples."

The longstanding UN ban on the sale of arms from/to Iran was terminated early on Sunday under the terms of the UN Security Council Resolution 2231 that blessed the 2015 nuclear deal between the Islamic Republic and world powers.