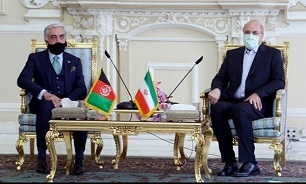 Qalibaf referred to his recent meeting with Head of Afghanistan’s High Council for National Reconciliation Abdullah Abdullah in Tehran, and said that they have discussed establishment of border markets and water sharing from Hirmand River.

“Tranquility, peace and security of the two countries depend on their friendly relations to the benefit of the two nations,” he wrote on his twitter page on Tuesday.

“Expansion of trade with the neighboring states is one of the main priorities of the parliament,” Qalibaf said.

During the meeting, Qalibaf said the United States has been destroying Afghanistan for the past decades, stressing that the security of the Islamic countries has no room in the US policy.

“Americans are just after advancing their own schemes and do not care about progress and security of the Muslim countries,” he said, while reiterating Iran’s support for the Afghan government and constitution.

Iran’s speaker added that Afghanistan has been suffering from insecurity and instability since 4 decades ago till the current presence of US occupying forces.

"As long as regional countries, nations and their different ethnic groups have not gained unity, coordination and empathy, foreign forces, led by the US, will only pursue their vested sinister objectives," Qalibaf said.

He said Iran has always tried to consolidate unity among Muslim countries without any interference in their internal affairs, stressing that Iran and Afghanistan enjoy deep historical and cultural bonds.

Abdullah, for his part, hailed Iran's support for his country, saying that Tehran aims to support the establishment of peace in Afghanistan within the framework of the country's constitution and in line with its Islamic government.

He said that Tehran and Kabul are working on a comprehensive document for boosting bilateral cooperation and have made major progress in this regard.

“Iran and Afghanistan have common historical and civilizational roots and their common customs will further boost bilateral cooperation,” he noted.