Iran strongly condemns insult to Prophet of Islam in France 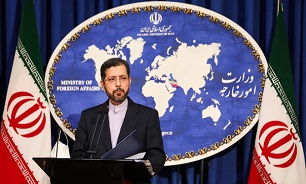 Following the stubborn continuation of insults to the Prophet of Islam (PBUH) in France, which unfortunately has been accompanied in some cases by the support of some French officials, Saeed Khatibzadeh strongly condemned any insult and disrespect to the divine prophets, especially Prophet of Islam.

"Undoubtedly, the unacceptable and violent actions taken by the few extremists, which originated from an extremist and deviant ideology in the Islamic world, which, ironically, its owners are also political partners close to the West and the United States, can in no way justify to insult and disrespect to the heavenly figure, who is respected by one billion and eight hundred million Muslims in the world," he said.

"Undoubtedly, the unjustifiable position of the French authorities is not an appropriate and prudent response to the extremism and violence that is condemned in its place, and it causes more and more hatred," he added, saying, "As we are witnessing some suspicious and disgusting movements in insulting the Qur'an by a few anti-Islamic extremist movements in some European countries which are strongly condemned."

Announcing his support for the position of Islamic countries in condemning such movements, Khatibzadeh called the insult to Islamic values and the beliefs of Muslims unacceptable and rejected.