Alliance Chief Says NATO Has Reduced Number of Troops in Afghanistan to Under 12,000 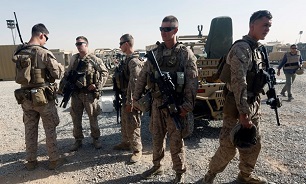 "NATO backs the [Afghan] peace process, and we have adjusted our presence to support it; a few years ago, we had over 100,000 troops engaged in combat operations. Now we have reduced our presence to under 12,000," Stoltenberg said at a press conference after a meeting of NATO defence ministers, Sputnik reported.

Regarding the peace process, Stoltenberg stressed the need for the Taliban to sever all ties with the al-Qaeda terrorist organisation.

"The Taliban must reduce the unacceptable levels of violence, to pave the way for a ceasefire. They must break all ties with al-Qaeda and other terrorist groups so that Afghanistan never again serves as a platform for terrorist attacks on our countries," the NATO secretary-general said.

Speaking about the news of an intra-Libyan ceasefire agreement, the military bloc's chief Jens Stoltenberg said that NATO welcomed the agreement.

"We welcome the announced ceasefire. We strongly support the UN efforts to try to find a political, peaceful solution to the conflict in Libya, and of course, the first important step of any lasting peaceful solution is a ceasefire," Stoltenberg explained.

However, the alliance chief stressed that the mission in Iraq will be expanded.

“Today, ministers tasked our military commanders to expand our mission in Iraq," he said.

According to the NATO chief, the alliance will continue to consult with the international anti-terrorist coalition and Iraqi authorities.

At the same time, the decisions by Turkey and Greece to cancel military exercises, which were previously set to be held next week, were welcomed by NATO's leadership.

"We also welcome the flexibility we've seen both from Turkey and from Greece and the announcement Greece and Turkey made at a meeting today that they have cancelled their respective military exercises next week. These are steps in the right direction, and it helps to reduce the risks of incidents and accidents, and I hope also it can be something we can build on, and I hope also it will support the efforts of Germany to facilitate exploratory talks about the underlying dispute between the two countries," Stoltenberg said.

NATO member states held a two-day online meeting on October 22-23 to discuss efforts to strengthen deterrence against security challenges, as well as the missions in Afghanistan and Iraq.