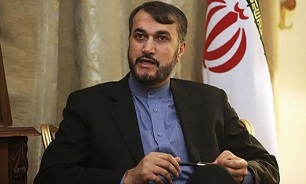 In a message penned to the ambassadors of Islamic countries based in Tehran on Monday, Amir Abdollahian felicitated the advent of birth anniversary of Holy Prophet of Islam Mohammad (PBUH), and reiterated that drastic measures should be made for establishing evermore unity and amity among Islamic Ummah.

It is necessary to make more efforts by focusing on the Islamic teachings and wisdom to achieve justice, peace, tranquility, unity and amity among Islamic Ummah, he underscored.

The 17th day of the lunar Islamic month of Rabi al-Awwal marks the birth anniversary of Prophet Mohammad (PBUH) and Imam Jafar Sadeq (AS) the sixth Imam of Shiites.

His comments came in the aftermath of a measure by French satirical magazine Charlie Hebdo, which reprinted offensive caricatures of the Prophet Mohammad (PBUH) last month. The cartoons were originally published by the Danish newspaper Jyllands-Posten in 2005, and then republished by Charlie Hebdo in 2006.