TEHRAN (defapress) – Speaker of the Iranian Parliament Mohammad Baqer Qalibaf stressed the need for thwarting the foreign sanctions with determination and courage in order to fix the economic problems.
News ID: 82625 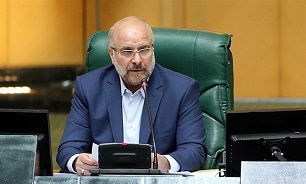 In comments at a parliamentary session on Wednesday, Qalibaf said Iran’s main approach in the current circumstances is to foil the foreign sanctions with resolve, efforts and courage.

Echoing Tuesday’s remarks by Leader of the Islamic Revolution Ayatollah Seyed Ali Khamenei, the Parliament speaker said it would be futile to expect a removal of sanctions for solving the economic problems.

In order to defeat the sanctions, all Iranian people must be strengthened, Qalibaf added.

His comments came after Ayatollah Khamenei called on the Iranian officials to concentrate efforts on thwarting and overcoming the sanctions instead of seeking their removal, pointing to the unsuccessful outcome of years of negotiations for lifting the sanctions.

The two remedies for dealing with the sanctions are “nullifying and overcoming the sanctions” and their “removal”, Ayatollah Khamenei said on Tuesday, adding, “We once tried the path of removal of the sanction and negotiated for several years, but it did not yield results.”