Zionists understand nothing but language of force

TEHRAN (Defapress) - The Leader of the Islamic Republic of Iran Ayatollah Seyyed Ali Khamanei urged Palestinians to force the Zionist regime to stop its atrocities by increasing their power and strengthening resistence.
News ID: 83332 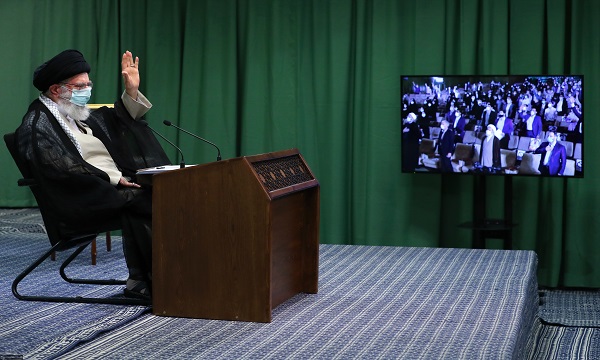 Ayatollah Khamenei referred to the brutal and cruel crimes of the Zionists in Al-Aqsa Mosque, Holy Quds and other areas of Palestine, saying, "These crimes are committed in front of the eyes of the world and everyone must do their duty by condemning it."

"Zionists understand nothing but the language of force, so the Palestinians must increase their power and resistance to force the criminals to give up and stop their barbaric acts," he added in a meeting with college students and student associations on Tuesday evening.

He went on to refer to the upcoming presidential elections in Iran, calling for a massive turnout to to strengthen the country's security and Islamic government.

Emphasizing that a government should be formed that is revolutionary, based on justice, anti-corruption which also believes in change and the youth, Ayatollah Khamenei noted, "If such a government comes to power, problems will be solved in a reasonable time and the ideals will be achieved."