TEHRAN (defapress) – Iran’s interior minister said in a statement that the November 4 incident which is recalled as the second Revolution, is reminiscent of tyranny and hegemony’s surrender.
News ID: 66856 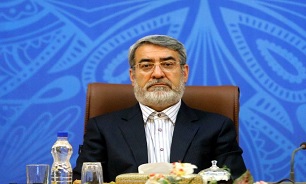 Interior Minister Abdolreza Rahmani Fazl has issued a statement to commemorate November 4, 1979, the anniversary of the US embassy takeover.

In the statement he wrote that November 4 which is recognized as the national day of fight against Global Arrogance, is a turning point for Islamic Revolution, marking a golden page in history for the courage of students.

On this day, he notes, Iran's committed and revolutionary students, respecting to the blood of martyred studenta, could conquer the invincible power of the Arrogance and captured the US den of espionage and resonate the cry of Iranian fight against oppression on international scenes.

November 4 falls on 13th day of the Iranian calendar month, Aban, and is also known as the Student Day to honor those who stormed the US embassy, captured its operatives and seized documents revealing US plots to overthrow the Islamic establishment in Iran.