Head of the Office of the Supreme Leader, emphasizing that the goal of the Supreme Leader's letters to Western youth is to struggle whit the West's Islam phobia said: One of the most important crimes of the West is to separate the Muslim youth from their families.
News ID: 67253 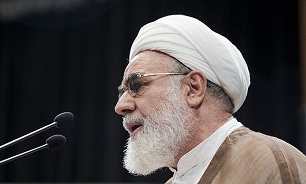 He said they began to discuss and dialogue with high-level, "said their letter to the youth of the West in the same terrorist issue have mentioned this incident and similar events mentioned and explained. » Why is this the motivation of this group of these attacks and their letter with the subject matter depends on the understanding of Islam, to be completed in the understanding of the Quran and the Prophet Muhammad.
He continued, in a letter to young people, he stressed that the Government will you have used and have tried the hidden truths of the world from you, stressed that the events of the past two centuries and a century of numerous crimes they Governments of the world and the second world war and the story of The rape of Palestine and the exploitation of the results to other countries.
Mohammadi golpayegani, stated that people who are Islamic feminism in an attempt to inject the wrong thoughts to your youth, the letter said that the leadership of this outstanding leader and weakening of the wrong is that all the heavenly religion of Islam to understand Islam need.

The head of the Office of the leader of the revolution, stated: today's world is that the results of the interpretation of the Koran being fair in it and this other place of cruelty to itself. The main building is a world based on justice, many of which formed the word abuse.
He stressed: the basis of Western works, the operation and the events that we see, the result is that abuse to turn small countries and technology influences. Their cultures to other countries and try the rich cultures of other countries.

Golpayegani said that the result of the injection of the Governments in order to promote the ideas of Islam, the fear and panic, including homosexuality and marriage.
He continued: the Iranian leadership in the letter, stressing that all young people should return to the great teachings and the teachings of his Government not to pay attention to the facts away.

Mohammadi-golpayegani said that all of them know that the formation of these groups stems from fear of Islam and stresses that other factions such as the front and daesh alnasrh etc. are made by the hands of the West. Even in his campaign, a group called themselves admit that Islam in Iraq and Syria to recognize and apply it as a means to show the other face of Islam and the aim of spreading Islam, introducing chaos.
The head of the Office of the Supreme Leader, pointing to the fact that the truth of Islam, "said Rahmani-face if a real Western youth understand that Islam is the same as the Qur'an says, is the leader of Iran's positive results are still stresses that Islam should be the main source of compliance.

Unfortunately, at present the situation of Muslims is inappropriate and the basic rule with the help of mercenaries who want the Shah's Government and not the mercy of themselves, trying to make them the worst conditions Moslems status way possible and we charged it They are trying to change their minds in such a way that young Muslims can disagree with each other, such as 6000 people participated in the traditional suicide operations and killed and if we all return to the teachings of Islam and youth, the truth will surely change.

In the end, golpayegani said that one of the most crimes of the West is that young Muslims from their families, and said that the militants like Shahid-Shahid Baqeral-nemar and thousands of others like him with innocence.