TEHRAN (defapress) – Deputy Chief of Staff of the Iranian Armed Forces Brigadier General Massoud Jazayeri slammed the US government’s decision to recognize al-Quds as the capital of the Israeli regime and said Washington will never reach its goals in the occupied territories.
News ID: 67299 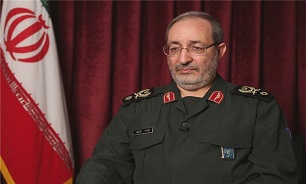 "Israel has occupied the Palestinian territory, and the continuation of the Palestinian people’s struggle against this cancerous tumor (Israel) indicates that the occupiers will never see peace and will have no choice but to leave the land or to perish,” Brigadier General Jazayeri said on Thursday.

The US and Israeli rulers have wrongly thought that they can exploit the situation in the region and reach their long-term goals regarding the Palestinian territories, he said, adding that like their miscalculations on Iraq, Syria, Yemen and elsewhere, their plots will fail.

The commander went on to say that the Zionist regime’s arsenal will belong to the Palestinians in the near future, adding that the American people should be aware that the problems at that time would be rooted in today’s policies of the White House.

The remarks came after US President Donald Trump officially declared the disputed city of al-Quds Israel's capital, despite warnings from around the world that the measure risks triggering a fresh wave of violence in the Middle East.