Martyr Khanbani in his will states: "Here is a university in which human beings are real, and they see the difficulties and hardness of their worldly times, and teach the lesson of faith, courage, bravery and masculinity."
News ID: 67875 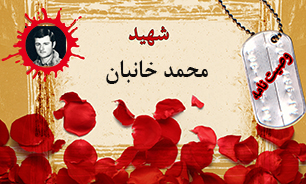 According to Sajed reporter :

In his remarks, martyr khanbani says: here is a University in which human beings are real and worldly problems and difficult time they can see and the lessons of faith, courage, courage and manhood arrived.

Statements of Shahid Mohammad khanbani, the education front. Shahid Mohammad Saeed, a reporter said khanbani day June 4, 1949 in ghazvin opened. He started with the imposed war against the victim and finally on 3 March, was fired. In 1986, he became a martyr in the reign of Iraq.

Here is the text of the verdict of this martyr:

Mom, it's night and day, suffering and adversity, so that psart will grow, and your dad. Work outside of the home and the resistance to food and cooking with sweet family your family and to provide a comfortable living to a family welfare.

Saleh dear parents! Love, love, love and courage and manhood to me and the children oflearn outher.
Happy birthday to you, the grandparents! Here is a University in which human beings are real, humans are the difficulty and hardness in your earthly life and its lessons of faith, courage, sportsmanship and peace arrived.

This is a University College that Hussein and his son, Imam (A.S), watching and he will lead our warriors, and mobilization, the army and all soldiers of the two prophets and imams, Imam and all bzergoarand like Hussein Bin Ali (PBUH) that on the day of Ashura with cruelty and blasphemy Have been destroyed, and with his head, we'll fight like him.
Dear parents and greedy! If I am proud I was giving testimony, of course, I had rfaham and sins and if I'm not worried, because I went to the gods that all human beings and Muslims should go; and you really ought to look at Fatemeh Zahra (s), your honor and glory to Hussein. You've trusted in God the Lord and God in doomsday Armageddon will no doubt gather about it and this is a definite promise. And there's no doubt about it, and we, the Basij, if we've covered this dress, love of the Almighty God.

But my dad and me! I am convinced now that you're brave from the beginning of his life work and work and I got a great and hopefully Emir Ali, r. and my journey.