Martyr Hassan Bagheri believed that "we can"

According to epic and jihad reporter of DefaPress: Bagheri thinking and speaking. Listening and analysis. He was different from the type of the command. A room at the garrison golf that dot the map it was pasted away and any news that has reached to its implementation on the map to know where is the enemy and what can and what will be. 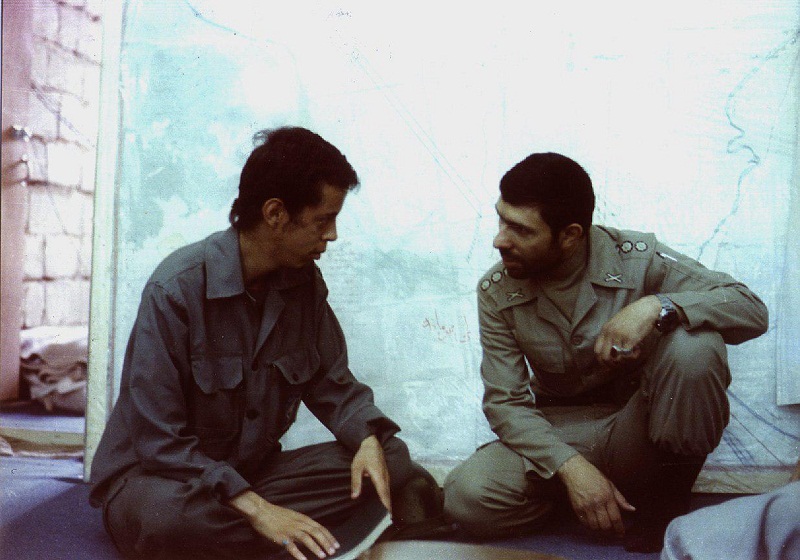 On the other hand coming out of the camp in search of his friends. Operational lines to the front and ran over the. Each mighty force with the IQ that you see him training, he had a responsibility to the Commander of the brave and the converter. The name of the martyr Commander h. Bagheri from the minds of the people and the commanders could not be cleared because he taught us that we can. " On the anniversary of the martyrdom of the Commander of the thirty five mastermind working with Basij Commander Brigadier General Bahman» President of the Foundation for preservation and publication of the values of sacred defense forces he has been at the front of the susangerd, sat down to a dialogue that continues:

The Defense presses: when martyr Hassan Sardar with Bagheri?

"Major General Brigadier General Hassan-Shahid Bagheri» AHL Tehran. I place my children with them but our homes for them with one or two street spaces. The North Khorasan field and we were living in the South of the square. Before the revolution, with the family of the martyr tabatabaei family home and the relationship we are sticking to our dating martyr Bagheri was home but was too low to be the first after the revolution, with Brigadier General Major General Mohammad Bagheri (MH Afshordi) who is now President of the headquarters of the armed forces due to the peer being dating I became.

With the beginning of the Iraqi imposed war and in late 59, along with martyr Ahmadi Khalaj of the Corps Headquarters had ruled by mr rahim (major General Rahim safavisayed yahya) go. Previously you go afshordi brother Mohammad (Mohammad Bagheri) told us when to go before there gone say that he h Bagheri is my brother. We are looking for Mr. rahim Ahvaz in Islamabad but he didn't and we find so we'll see, Bagheri h. when he saw the resemblance of the figures found that the ratio is near with the brother of Mohammad afshordi (Bagheri). She warmly welcomed us. It took h. Bagheri is responsible for operations, headquarters of the South and information based on golf. H. we take a ride on the machine. One man facade Conference that also accent that he realized after the seminar the same Mr. rahim that we were looking for. Martyrs of Ahvaz went to heaven. Martyr Bagheri too much with us. Night time ago he reads Golf camp.

Fascinated with the character h. Bagheri

The more of it I want to meet aghahsn in one of the front lines we serve and very willing to go to Khoramshahr. But he suggested that we introduce letters go and susangerd formr mahdi!. Martyr Ahmadi was not willing to go susangerd Khalaj but said as Hasan Bagheri says we operate better. The 24 hour h. Bagheri, were fascinated by the US personality. He dstkhtsh letter for Mr. mahdi the Commander of the Corps, and we wrote the susangerd information susangerd. It took the Corps Commander was parsley dear susangerd. martyr went before his Mehdi Zinedine introduce, and reads.

During the six fish that were in susangerd, between I and h Bagheri intimate communication is established. Every time he came sosangr we ran over and every time our which says it went to the head of her backside. Every time alone or with martyr Ahmadi Zinedine and Khalaj martyr Bagheri serve you we got, after the recitation of prayers and sat down to eat dinner, Joey and his memoirs of defined for us.

I remember h. Bagheri earlier in the year 1980a night with rahim  safavi to susangerd. Mr. Rahim was tired and the corner to rest long. I was identified as responsible for the team. Before the operation the Holy instant is also responsible to identify Paul was responsible for sablah. That night we had bread and cheese and Greens. The light Corps building was gendarme which belongs to the susangerd with a motorbrgh supply of low lights and our hand in the room was clear. I am martyr  Ahmadi, Zinedine, Khalaj and h Bagheri were the head of the seated dinner. Martyr  Bagheri about future wars and fronts so that spoke for us was not digestible. He said, we are sure we will be victorious in this war. We organize, people come to the front and the Iraqi army's defeat. In the event that we haven't done a big operation, we still have time and in the same year Holy and badehm through operation SAMEN op الائمه (PBUH) did that. Her talk was far-sighted. He's always coming to see. The year that has passed and we did great and operations division  Brigade and the newly discovered that were formed, what time it is, he said.

The martyr motahhari book for h. Bagheri summary I

High absorption power and her people with a different type of their absorption. H. Bagheri, a low figure in terms of age but it was really the power of charm and persuasion of the upper casting. Apart from that, the Lord of wisdom in literacy to martyr h. Bagheri had given. He is wise sacred defense. He's a good ear and a good ear because he could have a good analysis. He was also a good expression.

I did not see the other example courtesy of Bagheri. After shhadatsh a thlmeh set to defend the sacred entered and anyone could not accommodate him. For me in my life 2 template, one another, martyr Hasan martyr  Bagheri and Mohammad were.

The success of the operation in the Holy Martyr owe h. Bagheri. The Defense presses: martyr  h. Bagheri would combine operations with thinking how does thinking component, such as the information and identification to link operations?. Information operations in the Holy defense belongs to h. Bagheri. Operation means that you must first know and know  up the good decision of graft and my long workday. If the information is based on the correct principles of operation can be successful, but if the data is weak, the operation also failed. One of the good things that h. Bagheri * sacred Defense intelligence training and information operations in the Holy Martyr owe h. Bagheri. He did this with the new method. One of the things that this general election was that quality kids and took to work and for'm literate these courses. For example, he sent the army into Zinedine martyr to see training. When you see a large number of forces training to educational classes and susangerd, which was one of two Zinedine mderssh lesson time I teach. Martyr Bagheri on education quality forces stressed.

One of the characteristics of martyr Hassan Bagheri was convinced. Always do everything we can, more than it wanted. He's also the quantity and quality of care. For example, when we went to the back of the enemy positions, we identified and information we can for him; he said well done to us; but again more information wanted. He identified to the fine points of time. H. Bagheri threw this place that no data should not miss any action. Large operations such as the fath al -mobin of Jerusalem is truly open with a vision and a correct identification. Later that martyr Hashemi camp n time way to follow the thoughts and h Bagheri. A thorough understanding of the martyr  Bagheri Baathist army commanders towards and for all they had the correct certificate; both in terms of personality and the Pro.

He succeeded in the war deadlock information, discover. In places that were not working as her mind by identifying and studying it. Of course, h. Bagheri too we should summarize information because he was also a military commander. Martyr Bagheri on fath al mobin of Jerusalem is one of the commanders of the camp was a successful operation. Martyr  Bagheri was talking to his analysis of the situation and today the area is also an expression.

. The Defense presses: martyr h. Bagheri in the first years of the war, addressed to the forces of the two sides, be careful to admonish the less they will be killed because the Iraqi forces for the future of the Islamic revolution in Iraq, see. Do you look into the future, martyr  Bagheri it where it will receive when the Iraqi forces remain in the territory.

One of the specialties of h. Bagheri was that talent, and in this context was very clever. With one out, a meeting would knew that where it is good for the individual and the enterprise.

. Why can't we have it? The likes of h. Bagheri were the nuclear and missile to be there. We in the resistance and in the sphere of culture, economy and society also can have the courtesy of Bagheri. I am very young and I hope the people of the current. Young people now of the sacred Defense during the revolution and young basoadatr and strong trend. Imam Khomeini (RA) came to us to learn that "we can." If we believe that we can succeed. Believe should be there in our youth. When the revolution began, and the war we had to empty the tail cristian  Imam Khomeini (RA) were able to stand in front of the other views. Now Imam Khomeini (RA), Hazrat succession to name Ayatollah Ali Khamenei. Imam Khamenei's arena to watch closely. The first missionary who compiled the sacred defense, command level. He is a human, spiritual, literary, Reader, mujtahid 1 and politician. We should be thankful that we have such a leader, and now with the leadership of the Islamic Republic of Iran he is tactful on the peak of glory.

I went to a lot of foreign trips. 86 years, along with the President of the company in time for the UN General Assembly. I saw there scenes which the sacred system of the Islamic Republic of Iran and the authority of proud of it. We are at war we entered barbed wire but today some countries around the world have been gathering up the front of the missile, nuclear and scientific progress we make. Scientific advances in the country proud.

A worthy succession to revolution leader Imam Khomeini. Today all classes, groups, and the various factions of society most trust to the leader and this divine attention to them. They are subject to the verse, chapter 96 of Mary the Lord thy faith has said next time and do a competent practice and we put in the hearts of the people you love. Therefore, people like him and trust him. He is also the country's incredibly wise management. In that period, some inside and outside the country to the precipice, such as lips, but so incredibly wise in his country 88 intrigue have intrigue and management of this rescue.

What happened recently in the Gulf took the young guards detained American rapist forces, showing our authority. These young people are not the guardians of the Holy Imam did not understand the defense but with the courage to do it. Is not a simple job that stopped American float 2. If American troops to the leaders of the Arab countries of the region, it will throw the tshr fear. But this revolutionary not only of the threats but it don’t afraid.

Defense press: at the end if you want to martyr Commander h. Bagheri in one sentence summarize, what say? Hakim Hassan Bagheri.

Hello, God and the divine spirit of the noble martyr on parents Professor h. Bagheri.