Iran's Basij (volunteer) Force Commander Brigadier General Gholamhossein Gheibparvar described the US embassy relocation from Tel Aviv to Jerusalem al-Quds as a strategic mistake, stressing that the move has increased unity among Muslims across the world.
News ID: 70588 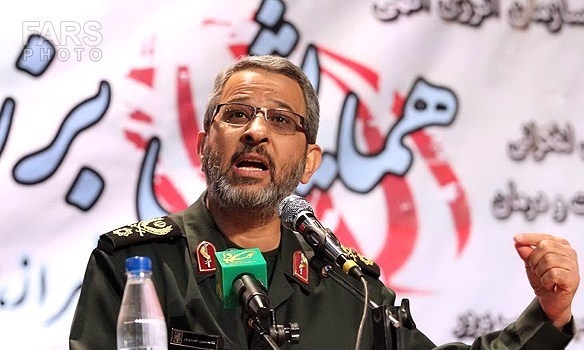 TEHRAN (Defapress)- "This big strategic mistake has further bolstered solidarity of the Islamic Ummah," General Gheibparvar told FNA on the sidelines of the International Quds Day rallies in Tehran on Friday.

He also referred to the US withdrawal from the 2015 nuclear deal with Iran, and said this enmity has increased the Iranian people's motivation to participate in the Quds Day rallies more massively than the past.

Millions of Iranians from all walks of life took to city streets all over the country to show their full and everlasting support for the oppressed Palestinian nation against Israeli occupation and aggressions, specially its recent massacre of the Palestinians in Gaza.

People in large groups of tens of thousands in Tehran and other cities across the country converged in main city squares on the International Quds Day on Friday to condemn Israeli occupation and its recent massacre of Palestinian demonstrators in the Great March of Return as well as those who were protesting against the US move to transfer its embassy from Tel Aviv to Jerusalem al-Quds.

Recent months have seen a major escalation of violence in Gaza, with more than 120 Palestinians killed by Israeli fire since the end of March, when the Great March of Return demonstrations began.

In Tehran, demonstrators congregated at the University of Tehran, the site of Friday prayers for the past three decades.

Head of the Intifada and Quds Headquarters Brigadier General Ramezan Sharif said on Saturday the International Quds Day rallies would be held in tens of parts and nations of the world on Friday to voice support for the defenseless Palestinian people and condemn the Zionist regime's atrocities.

He also said that nearly 900 Iranian cities would witness popular rallies in support of the defenseless people in Gaza before the Friday prayers ceremonies.

Sharif stated that some 5,300 Iranian and foreign reporters, including 160 foreign photojournalists and reporters, cover the International Quds Day rallies in Iran.