TEHRAN (defapress) – Stating that Iranians are revolutionary, standing by each other in a great country, President Rouhani said, “we are a big family and it is natural to have problems. We should be proud of fighting corruption step by step."
News ID: 73864 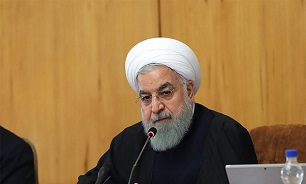 Speaking at the regular weekly cabinet session on Wednesday, President Hassan Rouhani said, “we should leave the issues to the related bodies to study them at the expert level."

Some issues are very clear, said Rouhani, adding, “why do we fight over clear issues? The truth is that the entire world is faced with money laundering. We must all make attempts to decrease corruption and stop money laundering."

Stating that the Islamic Republic of Iran is the pioneer of fighting terrorism, he said, “Iran is the biggest victim of aggression and terrorism and using weapons of mass destruction and the major state in fighting WMDs, because we are its victims."

He added, “today, we should be –and are- the top country in not letting terrorists take advantage of different financial systems for transferring money."