TEHRAN (defapress) – Another round of talks on the Saudi-led war on Yemen will likely take place in the coming months, sources said, as warring parties met for UN-sponsored talks in Sweden.
News ID: 74235 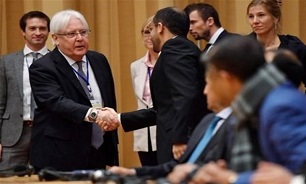 The Sweden initiative marks the first meeting between the two sides since the 2016 breakdown of talks to end the Saudi war, which has claimed more than 15,000 lives since 2015 when the aggression began.

It has triggered the world's worst humanitarian crisis, with nearly 14 million Yemenis at risk of mass starvation as violence, poverty, disease and blockades bring the impoverished country to its knees.

The talks are not aimed at finding a solution to the Yemen conflict, according to the UN.

Instead, they are focusing on a few key areas, the humanitarian corridors, a prisoner swap, the reopening of the defunct Sana’a international airport and the fate of Hudaydah, the Red Sea city that has proved an impasse in the talks.

Speaking on condition of anonymity, a UN source at the talks in the rural village of Rimbo said both Yemen’s Houthi Ansarullah movement and forces loyal to fugitive former president Abd Rabbuh Mansur Hadi had indicated they were willing to hold further talks in coming months, AFP reported.

"If we do not get the support of key states, then there will not be a solution," said the UN source.

Yemen’s Houthi Ansarullah movement and forces loyal to Hadi are meeting for a fifth day of talks in Sweden aimed at halting the Saudi-backed war on the impoverished Arab country.