TEHRAN (defapress)- Iran is the most important democracy in West Asia and the most developed country of the Middle East in terms of science and technology, Secretary of Iran’s Human Rights Council Mohammad Javad Larijani said, adding that these features of the country are the main reasons of animosities towards Tehran.
News ID: 74264 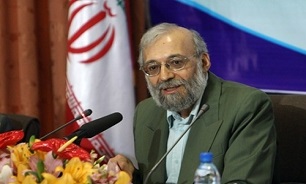 "Iran, the most important democracy in the West Asia, is the most developed country in the Middle East with respect to science and technology e.g. nuclear energy and that's why western countries are trying to stop us since they have already known that Iran does not plan to make a nuclear bomb," Secretary of Iran’s Human Rights Council Mohammad Javad Larijani said in a meeting with cultural council officials of Kerman province on Sunday.

The Head of High Council for Human Rights also said that Islam has a universal aspect and does not exclusively belong to Arabs and the strict punishments for criminals considered by Islam actually protect lives of the humankind.

"The most important achievement for the revolution is our civil system which is considered as the brightest democracy in western Asia. Some people used to claim that our system doesn't let people participate in its formation but, Imam Khomeini reacted to this wisely and now according to our constitution, any decisions made with regard to the system is resulted from people's votes", he said.

He also mentioned the meetings held with European delegations in Iran and discussions made on the Shia Imams' school of thought all of which convey that "we totally agree on talking over the challenges of the revolution and this enables us to make this school known to the world."

Mentioning the recent unrest in Paris, he said that these incidents aren't related to terrorism and they are all political and are so loud. Now, if a worker would go on strike in Iran, western countries would immediately relate it to the government and would do their best to broadcast it to the full extent through their media.

Our human rights dispute with western countries is related to the question we ask whether the Iranian nation has the right to adjust its civil life based on Islam or not. They say people's lifestyle should be defined according to human rights instruments issued by the west, while we believe we have the right to choose our lifestyle based on the Islamic thought, Larijani said.

Another area on enmity with Iran is the public purity among men and women which is different from the purity in western countries. Our enemies are working hard on this area so that they could publicize impurity among men and eliminate the innocence among women in our society, the Human Rights Chief added.

The Islamic Republic of Iran has a duty to protect the society against impurities. Today, the post modern feminism states that the greatest cruelty against women is to believe that women are similar to men and the interesting point is that this motto matches our Islamic mottoes, he said.

Early in December, Iranian Vice-President for Science and Technology Sorena Sattari announced that Iran stands atop the nations of the region in the production of science and technology.

"Now, Iran ranks first in the region in science and technology," Sattari said, addressing a forum on stem cells in Tehran.

He also referred to Iran's huge progress in the field of stem cells, and said that the country has been able to take over Turkey and Israel in this field.

Sattari underscored that Iran's progress in the field of stem cells and regenerative medicine has opened a door to the development of knowledge-based economy.

Iran has made huge progress in different sciences and technologies in recent years.

In relevant remarks in June, Sattari underlined that Iran's international ranking in science production had risen from 34th to 16th.

"Iran ranks first in West Asia in terms of science output with the number of its college students rising to 4.8 million from 2.4 million," Sattari said, addressing the second Iran-Europe Cooperation Conference in Brussels, Belgium.

He reiterated that Iran had made great progress in the fields of biotechnology, renewable energy, nanotechnology and stem cells.

He said that Iran had one of the most successful biotech companies with young and skilled staff aged 33 on the average which exported biological drugs to 10 countries, Sattari said.

Of 39 technology parks existing in Iran, Paris Park is one of the largest in West Asia which houses 200 companies and some of them export advanced technological products, he added.