China Accuses US of Fabricating Facts with Cyber-Attack Accusations 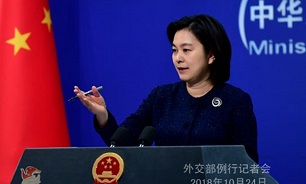 China's Foreign Ministry called on Washington on Friday to “stop smearing Chinese on cyber security issues” after it accused Beijing of running a global campaign to target companies and agencies in a dozen countries, press tv reported.

The State Department also indicted two Chinese nationals for allegedly hacking into the computer networks of companies and government agencies in several Western countries with the aim of stealing intellectual property and confidential business and technological information. They have not been arrested.

Chinese Foreign Ministry Spokeswoman Hua Chunying, however, said they lodged an official protest and against the allegations that she described as "deliberate defamation" that “purely made out of thin air.”

"It has long been an open secret for the relevant departments of the United States to conduct large-scale and organized network theft and monitoring and monitoring activities against foreign governments, enterprises and individuals," she said.

Hua urged the US to drop the charges and warned other countries to "stop deliberate defamation of China, so as not to damage... bilateral relations."

Australia, New Zealand and the UK also joined the US in accusing China of cyber-attacks.

She stressed that Beijing “has never participated in or supported anyone in any way in stealing trade secrets.”

This was not the first time that Washington made such accusations against Beijing. Back in 214, American prosecutors indicted five members of the Chinese military for computer hacking charges.

In October, the Justice Department charged a group of Chinese agents with trying to steal aviation technology from US companies.

Tensions between the two world powers have been running high over several issue, including a bitter trade war.

US President Donald Trump initiated the trade dispute with China in April, when he first imposed unusually heavy tariffs on imports from China. Beijing retaliated with duties of its own and dropped Chinese imports of American products.

Trump and his Chinese counterpart Xi Jinping reached an agreement over dinner on the sidelines of the G20 summit in the Argentinean capital, Buenos Aires, earlier this month, which halted the threatened escalation of punitive tariffs while the two sides continue negotiations.

The 90-day halt in the trade war, however, does not seem to have resolved much of the two sides’ deep trade differences. It has left US tariffs in place on 250 billion dollars’ worth of Chinese goods but for now removed the prospect of another 200 billion in tariffs or to impose tariffs on all imports from China.