TEHRAN (defapress) – Islamic Revolutionary Guard Corps (IRGC) Commander Jafari said the presence of US naval fleet in the Persian Gulf is aimed at deceiving regional states into believing that US is ensuring their security.
News ID: 74507 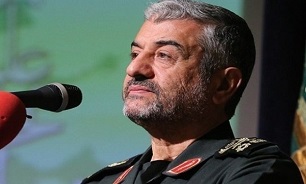 Making the remarks on Qeshm Island on Saturday night, Mohammad Ali Jafari hoped that Persian Gulf littoral countries would not be deceived by the enemy.

“It is the Islamic Republic which ensures the security of the region, Strait of Hormuz, the Persian Gulf, and friendly countries," he said, adding "the conducted military drill was a response to enemies’ claims," referring to the large-scale military maneuvers code-named the 'Great Prophet-12' which wrapped up on Saturday.

Elsewhere, he went on to say that Iran’s strategy has been so far defensive, “but it seems that from now on, we should be prepared for offence and pursuing enemies.”

Enemies should know that if they strike, Iran not only will fight back, but it will also hunt them down as far as it's necessary, IRGC commander warned.

On Friday, a US naval fleet including USS John C Stennis aircraft entered the Persian Gulf through Strait of Hormuz while the IRGC was conducting drills. According to reports, some 30 IRGC boats trailed the US fleet as it was passing through the strait.