Iran Urges Europe to Act against US Unilateralism

TEHRAN (defapress)- Iranian Foreign Minister Mohammad Javad Zarif said that Europe cannot stay inactive and at the same time express verbal opposition against US unilateral moves in the world, saying that it is now the Brussel’s turn to put its promises into practice.
News ID: 75695 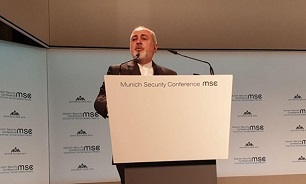 Zarif, in a tweet on Sunday, called on European countries to take practical steps to reject US unilateralism, warning that Iran cannot fight for global security despite EU reluctance to seriously preserve the nuclear deal, also known as the Joint Comprehensive Plan of Action (JCPOA).

“Iran cannot forever foot whole bill for vital global security achievements–whether it's the JCPOA or combating of drug & human trafficking. Time for Europe to get wet if it wants to swim against dangerous tide of US unilateralism,” the foreign minister tweeted after delivering his speech at Munich Security Conference.

Late in January, Head of the Atomic Energy Organization of Iran (AEOI) Ali Akbar Salehi said Europeans, as the main beneficiaries of the agreement with Iran, should speed up efforts to materialize the Special Purpose Vehicle (SPV), warning that Tehran’s patience is wearing thin.

Salehi said, “It is unfortunate to say that lately the developments have not been very encouraging.”

He said Europe should take this as a message.

He further expressed hope, “Before it is too late, Europeans, in particular, should fulfill what they have promised beforehand, otherwise I am afraid that the future developments will not be conducive neither for us nor for them or even for other participants of the JCPOA.”

Elsewhere in the interview, Salehi went on to say that Iran does not want to see the deal disintegrated and breached by any of the present members.

He said though the US has already left the JCPOA, there are still other members who have stayed committed to the deal.

Salehi went on to reiterate that “Iran has been fulfilling its commitments regarding the deal and the 13 reports by the IAEA confirming the fact is a clear proof of this claim”.

“The International Atomic Energy Agency (IAEA) has confirmed this in its 13 consecutive reports, based on a robust verification system, proving that Iran is implementing its nuclear commitments. There is no credible peaceful alternative to the JCPOA,” the official added.

“The Europeans as the main beneficiary should think about the consequences of the decision, as Iran has so far fulfilled all its commitments under the JCPOA,” he said.

The top nuclear official noted, “Iran’s patience is wearing thin and it is time for the EU to take its strategic decision.”

“So I say that this is a battle we should not lose,” he added.

“We should win this battle and we can only win it together. Otherwise, it will become a battle already lost and certainly this will not be in the interest of the Europeans, specifically if we notice that they look at the JCPOA mainly from the perspective of security.”

In a related front, earlier on December 12, Salehi warned that his country enjoys the capability to restore 20-percent uranium enrichment if the 2015 nuclear deal is discarded by parties still remaining under the agreement.

He said that under the 2015 nuclear deal, Iran accepted to put confidence-building curbs on its nuclear program, but they do not obstruct the “peaceful activities of Iran’s nuclear industry”.

“Enrichment is currently underway, but we would put aside the 300kg limit (set by the nuclear agreement) whenever we wish, and would do the enrichment at any volume and level,” he said in an interview with state TV on the sidelines of a visit to the Fordo nuclear facility.

“We currently have 1,044 centrifuges in Fordo, and if the establishment wants, we will restart 20-percent uranium enrichment in Fordo,” he noted.

He expressed hope that the remaining parties to the nuclear agreement would deliver on their promise and implement their commitments in order to fill the gap created by the US after its unilateral withdrawal from deal, officially known as the Joint Comprehensive Plan of Action (JCPOA).

Otherwise, he said, Iran will have to reduce its JCPOA commitments.

“I would like to warn that this is not a bluff; I have kept my word whenever I’ve said something. Now I’m emphasizing once again that if the establishment wants, we can easily return to the 20-percent enrichment, and meet the country’s needs at any level and volume,” he noted.

In relevant remarks in November, Salehi said that the European Union’s failure in providing the needed ground for Tehran to enjoy the economic benefits of the nuclear deal would exhaust Iran's patience, asserting that resuming uranium enrichment to 20% purity is one of Tehran's options in that case.

"Iran could resume enriching uranium to 20 percent purity--seen as well above the level suitable for fueling civilian power plants--if it fails to see the economic benefit of the 2015 deal that curbed its nuclear program," said Salehi, in an interview with a Western news outlet before his meeting with EU Foreign Policy Chief Federica Mogherini in Brussels.

"If we cannot sell our oil and we don’t enjoy financial transactions, then I don’t think keeping the deal will benefit us anymore,” he highlighted, adding, "I will pass certainly a word of caution to her (Mogherini): I think the period of patience for our people is getting more limited and limited. We are running out of the assumed timeline, which was in terms of months.”

Europeans' honesty in dealing with the Iran nuclear deal is seriously doubted by Iranian masses that are discontent with talks with European counterparts.

In contrast with what European politicians and government are stating, many experts in Iran are suspicious of Europe's genuine commitment to the letters of the nuclear agreement of July 14, 2015, and are voicing their discontent with what they describe as Europe's strategy of killing time.

Even some commentators like Seyed Mostafa Khoshchashm are calling the Iranian government to start meaningful modifications in JCPOA undertakings, and specially remove the cap on the country's enriched uranium stockpile after the US unilateral withdrawal from the agreement; a call which is gaining momentum among the Iranians.