TEHRAN (defapress) – The United States will leave about 400 US troops split between two different regions of Syria even as it withdraws most of the 2,000 troops currently in the country, a senior official in the administration of President Donald Trump said.
News ID: 75791 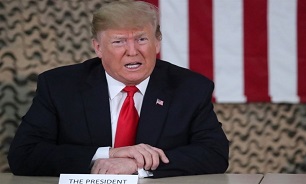 Trump said the move does not constitute a reversal of his December announcement that he had ordered the pullout of 2,000 troops from the country, the official, who spoke on condition of anonymity, told Reuters on Friday.

But he was persuaded by advisers Thursday that about 200 US troops would join what is expected to be a total commitment of about 800-1,500 troops from European allies to set up and observe a safe zone being negotiated for northeastern Syria, the official said.

About 200 other US troops will remain at the US military base at Al-Tanf, near the border with Iraq and Jordan.

“We don’t want to see a resurgence of ISIS (Daesh),” the official said.

The reversal in policy shows the risks of Trump’s improvisational approach to foreign affairs.

Trump ordered the withdrawal of all 2,000 American forces from Syria in December 2018 amid preparations by Turkey to launch an operation against US-backed Kurdish militants in the Arab country.message end/