Pompeo 'Erupted' over Pence's Scolding of US Allies on Iran

TEHRAN (defapress) – When US Vice President Mike Pence in Germany and Poland this month urged European leaders to follow the United States' example in abandoning the 2015 nuclear deal between Tehran and world power, Secretary of State Mike Pompeo reportedly was not happy.
News ID: 75831 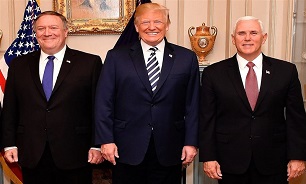 Pence's comments shattered a "fragile unity" Pompeo had cobbled together for talks about Iran with US allies, The New York Times reported Sunday in a lengthy new profile of Pompeo's tenure at the US Department of State.

Publicly, the secretary kept silent. But behind closed doors, the story says, he raged at Pence's untimely message.

It added, “Pompeo unfailingly sticks to the presidential line. For example, he publicly refuses to acknowledge the intelligence agencies' assessments — including those prepared by his former staff at the CIA — that contradict Trump” on matters like North Korea, Iran, Saudi Arabia, and Daesh (ISIL or ISIS).

Trump has rewarded Pompeo's loyalty by anointing him the point person on several signature issues. Those include North Korea and Afghanistan, a subject on which one American official said Pompeo and Trump speak directly to each other, sidelining (National Security Adviser John) Bolton.