Trump Admits Failure of US Policies in Syria, Iraq

TEHRAN (defapress)- US President Donald Trump on Saturday criticized his country's foreign policies in Iraq and Syria, saying that his administration will focus on fixing up America's infrastructure rather than fighting "endless wars".
News ID: 75956 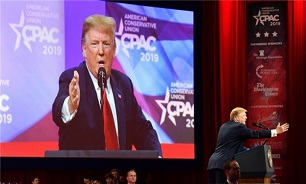 During his two-hour speech at the Conservative Political Action Conference (CPAC), Trump stressed that Daesh will be defeated "100 percent" in a day or two and reiterated his administration's firmness to pull American troops, Anadolu Agency reported.

"We will leave a small group of guys and gals [soldiers] but we want to bring our people back home. It is time," Trump said in the annual event in National Harbor, Maryland, adding, "We would be in Syria for 4 months but we ended up 5 years. Just funny."

He slammed the Middle East policies of former US governments, recalling his first-time visit to Iraq in 2017 when they had to turn off all the lights at the military plane before landing for security purposes.

"Think of this. We spent seven trillion dollars in the Middle East and we can't land a plane with lights on, 20 years later. How bad is that!" Trump stated.

e also criticized his former Defense Secretary James Mattis and other generals in Syria and Iraq for being too slow in finishing Daesh and said that he learns more about what is going on from the soldiers than generals.

The American president added that he is not going to be a president who will sit behind his desk, hinting direct involvement in all military policies and commitment to major withdrawal from the Middle East.

Trump stated on Thursday that Washington-led fighters in Syria have recaptured all of the territory once held by the Daesh terrorist group.

Speaking to US troops stationed in Alaska, Trump announced that Daesh forces had been driven out of Syria entirely.

"Now it is 100 percent [of the caliphate in Syria] we just took over", Trump said during a refueling stop at Joint Base Elmendorf-Richardson, a US military facility in Alaska, adding that the campaign to capture the territory had taken less time than his generals had expected.

"We did it in a much shorter period of time than it was supposed to be," he claimed.

In December, Trump announced that all US forces would leave Syria and declared the complete Daesh defeat in the war-torn country, without specifying the deadlines for the pullout. Trump later added that "local countries" should "take care" of the situation and deal with remaining terror threat.

In February, Trump told CBS News in an interview that the United States was keeping its troops in Iraq in order to be able to "watch Iran".

The US will keep around 200 troops at the al-Tanf base and around 200 more soldiers in Northeastern Syria the peacekeeping, an anonymous US administration official, quoted by Reuters, revealed.

The 400 American troops will be part of a total force of 800-1,500 Western soldiers in Syria, with the rest provided by Washington's European allies, Reuters reported.

The official also noted that both the US and its European allies are still engaged in talks on the creation and participation in maintaining a safe zone in Northeastern Syria.

Washington claims it's military deployment, which is not mandated by the UN Security Council and is also opposed by the Syrian government, was necessary to fight the terror group Daesh.

The Al-Tanf base is a constant subject of complaints by Russia, which accused the US military of turning a blind eye on militant groups using the territory under their control to regroup and launch attacks against Syrian government troops. Moscow also said the Rukban refugee camp, which is located near Al-Tanf, serves as a recruiting ground for militants.

Daesh forces, which launched a terror campaign consisting of bloodshed and destruction against people in Iraq and Syria in 2014, have been largely eradicated.