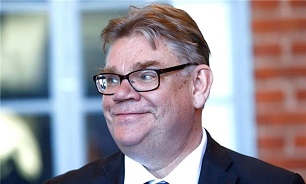 During their Thursday meeting, Zarif and Soini exchanged views on bilateral and regional issues, along with the most recent international developments.

Both diplomats are in New York to take part at United Nations General Assembly Annual Conference on “Remarking and Promoting International Day of Multilateralism and Diplomacy for Peace”.

Following his meeting with Zarif, Soini said, “We are long-standing colleagues and we discussed most significant issues during the meeting.”

Commenting on the impacts of the US refusal to reissue Iran’s oil waivers, he said that it was one of the topics dealt with during the meeting with Zarif.

During the meeting, Amir Abdollahian told Norvanto that US’ regional policies have claimed 500,000 lives and $400 billion of damage in Syria, adding that Saudi Arabia's totalitarianism is obstructing peace in Yemen.

In the meeting, the Finnish ambassador to Tehran was accompanied by the CEO and a number of members of the Crisis Management Initiative (CMI).

Crisis Management Initiative (CMI) is an independent Finnish non-governmental organization that “works to prevent and resolve conflict through informal dialogue and mediation.” It was founded by former President of Finland Martti Ahtisaari in 2000.

He then referred to the withdrawal of American troop from Syria, saying “the killing of more than 500,000 Syrians and causing over $400 billion worth of collateral damage to Syria is just the consequence of one of US wrong policies in the region”.

Saudi Arabia's totalitarianism is one of the obstacles to the achievement of peace and security in Yemen, he added.

Noting the humanitarian crisis in Gaza, he said that there was “no good prospect” for the Israeli regime in the region.

The Finnish ambassador, for his part, said the role of Iran is important to resolve many conflicts in the region.

A CMI official also highlighted the significance of dialogue for settling regional crises.

Iran has announced in numerous occasions that it welcomes bilateral and multilateral cooperation on combatting terrorism in the world, and it has been the major supporter of Iraqi and Syrian governments in their campaign against the ISIL and similar terrorist groups.