TEHRAN (defapress) – Iranian Parliament Speaker said that there is need to get into a cultural fight against different terrorist groups.
News ID: 77081 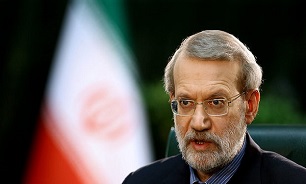 He made the remarks Sunday while addressing the International Conference on the “Future of Islamic World in the Horizon of 2035” in Tehran.

As far as security issues are concerned, terrorists such as ISIL may be defeated but the fact is that they still are active, said Larijani, adding, “One should not consider them eliminated.”

These terrorist groups are influenced by Wahhabism and created by foreigners, he noted.

He called for studying these groups line of thought so as to determine the method of fighting against them, adding that there is a need to combat them in the cultural ground.

The international two-day ‘Future of Islamic World in the Horizon of 2035’ started today at the conference center of Faculty of Law and Political Science, University of Tehran. “The purpose of the conference is to achieve a scientific understanding of the present situation and possible futures of the Islamic world,” reads the official website of the University of Tehran.