Trump and end of strategic realism at White House

TEHRAN(defapress)- US President Donald Trump has, according to some analysts, brought the US into an ear with no strategy.
News ID: 77321 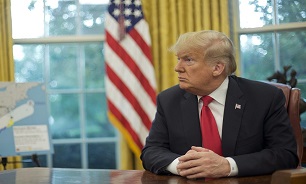 Regardless of the correctness or inaccuracy of this idea, Trump's negligence of a range of strategic realism teachings that had governed Washington's foreign policy for many years, has made a remarkable change in the White House's approach.

Recent missile tests in the Korean Peninsula once again focused the attention on the developments in this region and the fate of the Washington-Yong Yang talks.

Late last week, South Korean media reported firing and testing of short-range missiles from a base in the east of northern neighbor. Subsequently, sources in North Korea confirmed that the country's leader Kim Jong-oun had personally monitored these tests.

North Korea has refused to carry out any nuclear tests and ballistic missiles since the start of talks with the United States over the past year and a few months. According to Mike Pompeo, US Secretary of State, the Department of Defense must announce that North Korea's recent test was a ballistic missile or not. But he is still hoping his country will reach agreement with North Korea.

After this incident, contrary to some expectations, Trump took a mild stance towards Kim and wrote on Twitter that he had close ties with the North Korean leader, and Kim would not break his promise in the past talks, as well as the dealing between the two countries will reach to conclusion.

Despite these diplomatic compliments, Washington's concession to Pyongyang to participate at the negotiation table was almost none. North Korea insists on cancellation of part of its sanctions by suspending military and missile tests, but Trump says that he has not imposed new sanctions, it is a huge bonus to Pyongyang.

This situation is followed by the North Korean leader's displeasure, but for Trump, who boasts of stopping Pyongyang military tests, is a good condition. Consequently, the observers consider the North Korean measure as a warning to the United States to change the status of the talks.

In spite of his business approaches to domestic and foreign policy, Trump is a particular kind of businessman, a method some people call aggressive trading, and even a number of his close friends say the president of the United States is intending to achieve its political and economic interests in negotiation and trading with coercing the other party, the comprehensive use of all means of power and without giving concessions.

Other definitions of Trump’s diplomacy have been introduced since his arrival at the White House; negotiating with the stick minus the carrot to the madman theory, which refers to coercing the other side on Washington decision makers’ determination to commission unusual and costly actions.

While Washington has warned that on Friday (May 10th), will increase 10 percent tariff on imported goods from China worth $ 200 billion to 25 percent, and in an unprecedented move on another $ 320 billion of its trade with Beijing, will impose a similar tariff in its trade with China, the Chinese leaders have called for Trump’s compromise in trade talks.

These are examples of Trump's uncompromising practices in pursuit of political and commercial interests; the decisions that have led the analysts to make the remark that current president will sacrifice everything even the prestige and political providence for the country for its tangible economic benefits.

According to some media outlets, the result of Trump's trade-oriented approach and his pressure on Washington's allies and partners to increase profits in the favor of the United States has improved the indexes of employment in the country. The Gallup Institute recently announced in a survey that the popularity of Trump among Americans has gone up by an unprecedented figure of 46. Though more than half of Americans are still opposed to Trump, but he hopes to defeat on Democrats' rivals, relying on this popularity in the 2020 election.

However, the question arises is what are the consequences for the US to abandon the political leadership or self-proclaimed hegemony in the eyes of different partners and the reduction of its role of a four-dimensional (political, economic, military, and cultural) superpower to an uncompromising economic power in the future international system?

As noted, some international commentators say the Trump’s America has entered an era without any strategy. For example, at the end of August 2017, the US president unveiled a new US strategy in Afghanistan, promising to strengthen the military forces in the country.

A year and a few months later, the end of the autumn last year, Trump announced that he would withdraw a large part of the 7,000 US troops from Afghanistan and the US military personnel to leave Syria.

In addition to the lack of strategy and the use of short-term tactics to advance the objectives of the Trump government, a point that some analysts point out is his disregard for the principles of 'strategic realism,' which has been the focus of many of Washington's decisions in the past decades in the foreign policy.

In the wake of the Korean War (1950-53), President Harry Truman dismissed General Douglas McArthur. Truman's main reason for dismissal of the five-star American general and commander of the forces in in East Asia was his insistence on bombing the southern areas of China, the depth of the logistics that fed North Korea's troops in the war with South Korea and the Western military forces.

Although MacArthur considered the decision the end for East Asian conflicts and the bridge to the ultimate victory of America, strategic realism, which was later included in the nuclear race with the Soviet Union, prevented Washington's leader’s move to record the ultimate Military supremacy.

Thomas Schelling, the American economist and strategist (1921- 2016), as the founder of the theory of strategic realism, believed that in small and large-scale conflicts with competitors or partners, instead of trying to achieve ultimate victory, there should be a possibility for the opposing side to retreat. In other words, one of the main approaches to achieving long-term goals, is to avoid uncontrollable conditions, and avoiding costly encounters, giving a minimum of privilege and maneuverability to the opposite party.

Ignoring an important part of strategic realism is now showing itself in the practice of 'maximum pressure' on Tehran, refusing to grant any privilege to North Korea, insisting on the formation of a 'The Deal of the Century' in the occupied territory and the unconditional and highly unilateral support of Zionist extremist policies and uncooperative manner in trade talks.

The short-term uncompromising approaches of the White House during the presidency of Trump may represent themselves in the form of tangible commercial interests and political retreats of rivals, and may not lead to costly clashes, but it will pave the grounds for creating some kind of international cooperation against American extreme unilateralism and the decline of status Washington in the global hierarchy.