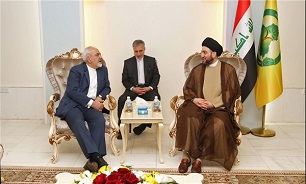 Zarif and a number of Iraqi political leaders met in Baghdad on Sunday to discuss issues of mutual importance as well as the latest developments in the region.

The foreign minister met with Ammar al-Hakim, the head of the National Wisdom Movement of Iraq, Hadi al-Amiri, the head of Badr Organization and the leader of Fatah Alliance, and Ayad Allawi, the head of al-Wataniya (National) coalition and former Iraqi prime minister.

In these separate meetings, Zarif thanked the efforts made by the Iraqi government for de-escalation in the region.

Zarif also appreciated the Iraqi government and nation and all the political parties of the country for supporting the Iranian people and government against the bullying of the United States.

The two sides also discussed bilateral relations and the implementation of agreements already signed between Iran and Iraq in meetings of leaders of the two countries in Tehran and Baghdad.

Iran's foreign minister arrived in Baghdad Saturday and met with Iraqi president, prime minister and his counterpart as well as other high-ranking officials.

In a joint press conference with his Iraqi counterpart Mohammed al-Hakim in Tehran on Sunday, Zarif underlined good talks with al-Hakim on regional issues, saying that Iran was willing to have balanced relations with all the Persian Gulf littoral states.

"Iran is ready to sign non-aggression pacts with the Persian Gulf Arab states," he said.

During the meeting, Salih welcomed his Iranian counterpart's invitation to visit Tehran, emphasizing the need to further broaden bilateral relations.

According to a statement by the Iraqi president's office, Salih and Zarif also underlined the necessity for preventing increased tensions in the region and importance of joint efforts to protect the region from the damages resulting from the US sanctions.

The statement also added that Salih stressed the importance of strengthening relations and cooperation with Iran.

During the meeting, Zarif submitted an invitation from President Hassan Rouhani to Salih which was welcomed by the Iraqi president.