Cause of Palestine, Quds, ‘indestructible’

TEHRAN (defapress) – Chief of Staff of the Iranian Armed Forces Major General Mohammad Hossein Baqeri in a message released late on Wednesday invited noble nation of the Islamic Iran to participate in International Quds Day rallies, saying that the cause of Palestine and Quds is not destructible.
News ID: 77595 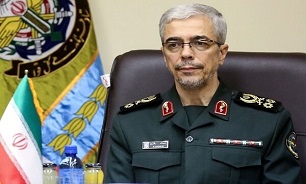 Undoubtedly, this year’s Quds Day will be turned into a huge and clamorous resurrection in renewing allegiance with the sublime ideal of Palestine and backing the oppressed people of Palestine and condemn the occupying, faked and the child-killing regime of Israel and its allies, said the commander.

He went on to say that the rallies will shatter the illusion of the US in imposing the pre-failed ‘Deal of Century’ and destroying Palestine like its other dream, including ‘the Greater Middle East’ and ‘Israel from the Nile to the Euphrates’.

Like in the past 40 years, the Iranian nation will massively take part in the Quds Day rallies to demonstrate that the cause of Palestine is not destructible and the true promise of God will be fulfilled by the ending of the Zionist regime and liberation of the occupied lands, he added.