Iran Not to Begin Any War

TEHRAN (defapress) – Iran’s President Hassan Rouhani gave an assurance that Tehran will never be the first side to wage a war in the region, but is ready for a decisive reaction to any military action.
News ID: 77741 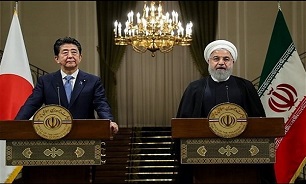 “The Islamic Republic of Iran will not initiate any war in the region even with the United States, but if a war begins with Iran, we will give a decisive response,” President Rouhani said at a joint press conference with Japan’s visiting prime minister in Tehran on Wednesday night.

The president also described some tensions in the region as the result of the United States’ economic war with Iran, adding, “Whenever this war ends, we will see a positive development in the region and the world.”

He also pointed to the close relations between Iran and Japan and the mutual cooperation in the field of nuclear activities, saying, “The two countries believe in peaceful nuclear activities and are against nuclear weapons.”

“Iran-Japan relations are long-standing and this year is the 90th anniversary of Tehran-Tokyo diplomatic ties,” he added, noting, “In today's meetings, we discussed relations between the two countries, including Japan’s cooperation and investment in southern Iran, especially in the Chabahar region and the Makran coast.”

The president stated that apart from the bilateral issues, the two countries discussed the approaches to stability, security and ease of tensions in the region.

The Iranian president added, “Mr. Prime Minister is very optimistic about the future and has stated in the talks that positive developments are on the way.”

"I am very pleased that the Japanese Prime Minister has voiced support of the Joint Comprehensive Plan of Action (JCPOA) in today's talks, considering this agreement important for the region and the world," Rouhani added.

“Iran is interested in staying in the JCPOA, and the measures that it takes will be within the framework of Article 36,” he added.

“I would like to express my gratitude to the Prime Minister of Japan and his accompanying delegation who are in Tehran with good will to pursue the two countries’ causes, which are peace, security and ease of tensions, and I hope that this visit serves as the beginning of development relations between the two countries,” he noted.

“Japan is an important country in the region and has always taken positive steps towards development, peace and security in the region,” the president stated.

“Today, we had constructive talks on regional cooperation between the two countries in various areas, including refugees, fighting drug trafficking and terrorism, and cooperation in rebuilding Syria and helping to resolve the Yemeni crisis,” he said.

Japan's Prime Minister Shinzo Abe, for his part, expressed satisfaction over being in Iran on the 90th anniversary of diplomatic relations between the two countries, and said, “Japan and Iran are historical countries with long culture and ancient civilization.”

Pointing to the escalating tensions in the Middle East and stressing the need to prevent war and tensions, the Japanese leader said, “Development of peace and stability in the region are not only beneficial for prosperity in the region, but also for the development of the world."

"No one is interested in increasing tensions in the region, and Japan will work on this matter with all its might," Shinzo Abe added.

“For the establishment of peace and security in the Middle East, it is important that Iran plays its constructive role,” he added.

Pointing out that Islam is the religion of peace and tolerance, Abe said, "I truly respect the Iranian Supreme Leader’s fatwa for the prohibition of weapons of mass destruction, including nuclear weapons.”

“The fact that Iran is continuing its cooperation with the International Atomic Energy Agency (IAEA) is very important, and I hope that Iran continues to stick to the nuclear deal, as it has done so far,” Abe stated.

Referring to his talks with President Rouhani about the ways to reduce tensions and establish peace and stability in the region, the Japanese premier concluded, "Japan is determined to develop relations and cooperation with Iran in various sectors and help the flood-hit people and import medicine to Iran.”