US Known World Over for Breaching Deals 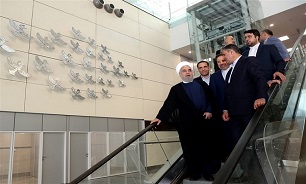 In comments on Tuesday, Rouhani highlighted the Islamic Republic of Iran’s commitment to every agreement it has signed, adding that conversely, the US has become internationally notorious for lack of commitment to treaties and deals.

“Iran has been honoring its commitments and signature and remained faithful to international agreements, while the one party standing against us (the US) has violated all international deals,” Rouhani added.

Denouncing the US attempts over the past years to accuse Iran of violating international agreements or threatening world security, the president said the situation has totally changed today.

“The entire world recognizes the US as a country reneging on its promises and acting in violation of the humanitarian regulations,” he added.

It is a valuable historical achievement and a victory for the Iranian nation to deal with a superpower in such a political and legal manner so that the world condemns the US, not Iran, Rouhani said.

The Iranian nation will emerge victorious in confrontation with the US, because it is not up against any other nation, but against a bunch of inexperienced politicians, the president underlined.

Rouhani was speaking at a ceremony for the opening of a new terminal of Imam Khomeini International Airport.

He said inauguration of the project indicates Iran’s economic vitality and also futility of the hostile attempts at misrepresenting the realities in Iran.

The US administration withdrew from a multilateral nuclear deal with Iran in 2018, after scrapping several other international treaties.

Washington’s decision to exit from the 2015 nuclear deal with Tehran, known as the Joint Comprehensive Plan of Action (JCPOA), and reinstate sanctions resulted in the collapse of about $38 billion in plane deals between Tehran and Western firms, with Airbus suffering greater damages than its US rival Boeing.