TEHRAN (defapress)- Reckless military moves in the Persian Gulf could lead to conflict fraught with unpredictable and destructive consequences, Russian Foreign Minister Sergey Lavrov stated, commenting on tensions between the US and Iran.
News ID: 78095 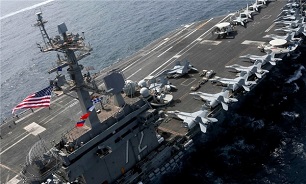 "We witness a buildup of the US naval task force [in the Persian Gulf] amid the ongoing exchange of accusations between Washington and Tehran, which creates the risks of an armed clash", Lavrov said in a written interview with Germany's Rheinische Post newspaper.

"Any reckless move may lead to a conflict fraught with unpredictable and destructive consequences," he added.

Tensions in the Persian Gulf area raised in June as several oil tankers from various nations got attacked there and in the neighboring Gulf of Oman. The United States and its regional allies claimed that Iran had a role in the incidents, while Tehran has denied the allegations. Moreover, the United States has announced the increase of its warships and troops operating in the region. Iran has also downed a US surveillance drone flying over the coastal Hormozgan province after the vehicle crossed into its airspace.

Moreover, the United States have been recently imposing economic pressure on Iran. Particluarly, Washington has unilaterally withdrawn from the Iran nuclear deal, formally known as the Joint Comprehensive Plan of Action (JCPOA), aimed at ensuring the peaceful nature of Tehran’s nuclear program in exchange for the removal of economic sanctions against the country.

Lavrov argued that the current surge in tensions around Iran was caused by the United States’ "short-sighted and dangerous" policies, aimed at completely deteriorating Iran’s economy.

"During our contacts at various levels, we are persistently calling on the United States to avoid any steps that could provoke further tensions around Iran. Our common goal is to prevent the situation from spinning into military confrontation and returning to the sustainable implementation of the JCPOA," Lavrov pointed out.

"We do not plan to cease the absolutely legal and mutually beneficial cooperation with the Islamic Republic of Iran at the behest of anyone’s ‘phobia’ or caprice," Lavrov stated.

Russia was among other JCPOA parties — China, France, Germany, Iran, the United Kingdom, and the European Union— that have slammed Washington's withdrawal from the agreement and the reinstatement of sanctions, saying it threatened not only Iran but international security as well as countries and companies that continued to do business with Tehran.