TEHRAN (defapress)- Head of the Islamic Revolution Guards Corps Public Relations Department Brigadier General Ramezan Sharif described downing of the US spy drone by the IRGC as shocking to many, and said that even the enemies have come to admit Iran's high defense power.
News ID: 78350 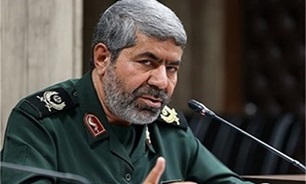 He referred to the intruder US spy plane which was shot down by the IRGC in June, and said, "Downing of the US drone with indigenized equipment shocked many."

General Sharif also warned enemies against Iran's retaliatory measures in response to any aggression, and said, "No one can stand against the Islamic Republic."

The IRGC shot down a US Navy’s Northrop Grumman MQ4-C Triton drone that had entered Iranian airspace in the Gulf of Oman to gather intelligence on June 20, using indigenous Sevvom Khordad surface-to-air missile system.