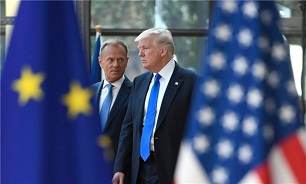 Tusk's comment at a press conference during the Group of Seven (G-7) summit in France followed a renewed threat by President Donald Trump to put a tariff on imported French wines, The Hill reported.

“I will protect French wine with genuine determination for many reasons,” Tusk stated, according to Fox Business.

“The EU stands by France. If the US imposes tariffs on France, the EU will respond in kind,” he added.

Trump told reporters at the White House before leaving for the G-7 summit Friday night that he is not a "big fan" of tech companies but added that “those are great American companies, and frankly I don’t want France going out and taxing our companies”.

“And if they do that ... we’ll be taxing their wine like they’ve never seen before,” he said.

Trump first issued the threat last month over France's new digital tax law, which places a 3 percent tax on yearly revenues of technology companies that make at least 750 million euros annually and provide services to users in France. It affects companies such as Apple, Google, Facebook and Amazon.

French Finance Minister Bruno Le Maire responded to the tweet, urging Trump to refrain from imposing the tax on wine.

“It’s in our interest to have a fair digital tax,” he said, adding, “Please do not mix the two issues. The key question now is how we can we get consensus on fair taxation of digital activities.”

The US Trade Representative has launched an investigation into whether the digital tax law is "discriminatory or unreasonable and burdens or restricts United States commerce".

Trump and Macron met Saturday to kick off bilateral meetings on the sidelines of the G-7 summit. Macron discussed agenda data-x-items for the summit, such as climate change, and underscored that "we will be allies, friends". Trump spoke briefly, saying the pair "actually have a lot in common" and “have been friends a long time".

Tusk also slammed what he called “senseless disputes” about trade between Trump and other international leaders, warning that the president’s recent actions on tariffs could "be really risky for the whole world".

Tusk warned reporters at the Group of Seven (G-7) summit that “this may be the last moment to restore our political community”, according to The Washington Post.

On Friday, trade tensions between the United States and China escalated significantly after China announced plans to slap tariffs on $75 billion worth of American goods. The country announced it was “forced to take countermeasures” against the US after getting hit with tariffs by the Trump administration in the two nations’ year-plus trade war.

Trump vowed to take retaliatory measures against China shortly thereafter and said in a tweet that US businesses were “hereby ordered” to “find alternatives” to China.

“We don’t need China. This is a GREAT opportunity for the United States,” he added.

Trump's remarks, combined with China’s latest round of tariffs and his administration’s vow to retaliate with tariffs on over $500 billion in Chinese goods, prompted stocks to plunge in the country not long afterward. The culmination of events in the past day have also fueled concerns about whether the global economy could soon be headed toward a recession.

Tusk cautioned on Saturday that “trade wars will lead to recession, while trade deals will boost the economy”.

He also took further aim at Trump for using “tariffs and taxation as a political instrument” in later comments.

“For me, it’s absolutely clear that if someone, for example ... the United States and President Trump, uses tariffs and taxation as a political instrument, tool for some different political reasons, it means that this confrontation can be really risky for the whole world, including the EU,” he told the press, according to The WaPo.