Nuclear-Armed States Can’t Tell Turkey Not to Have Nukes 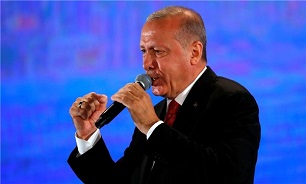 “Some countries have missiles with nuclear warheads, not one or two. But (they tell us) we can’t have them. This, I cannot accept,” he said in a speech in Turkey's central province of Sivas on Wednesday, World News reported.

Erdogan also argued that there is no developed nation in the world that doesn’t possess nuclear weapons.

He further added that Israel is using its nuclear arms to threaten others, noting, “We have Israel nearby, as almost neighbors. They scare (other nations) by possessing these. No one can touch them."

Israel is the only possessor of nuclear weapons in the Middle East, but its policy is to neither confirm nor deny that it has atomic bombs. The Tel Aviv regime is estimated to have 200 to 400 nuclear warheads in its arsenal. The occupying regime has refused to join the Treaty on the Non-Proliferation of Nuclear Weapons (NPT) in defiance of international pressure.

Turkey, however, is a signatory to the Treaty on the NPT and the Comprehensive Test Ban Treaty (CTBT), which are aimed at eliminating nuclear weapons.

Erdogan referred to a former president who once told the visiting Turkish leader about his country’s intention to have a larger nuclear stockpile than those of the US and Russia, without naming him.

The remarks come at a time when Turkey is in a row with the US over the purchase of the Russian S-400 missile defense systems. Washington recently excluded Ankara from its F-35 program. The Pentagon informed that in order to remain in the F-35 program, Turkey needs to drop the purchase of Russia’s S-400 missile defense systems.

Russia has already delivered two shipments of its top air defences to Turkey, despite efforts by the US to disrupt the deal between the two countries.

The Turkish Defence Ministry has announced that its troops have started training to operate the S-400 air defense systems, the deliveries of which commenced in July 2019. According to the statement, the training is taking place in the Russian city of Gatchina.

The head of Turkish Defence Industries, Ismail Demir, revealed that the top-of-the-line Russian defense systems would be operational by April 2020, meaning that they will be shipped in full and that the soldiers will have finished their training by that time.

Turkish Foreign Minister Mevlut Cavusoglu has earlier suggested that the country could order additional S-400s if the US again refuses to sell its Patriot missile systems, something that Washington has offered Ankara as an alternative to the Russian weaponry.

Erdogan has recently stated that Ankara is holding talks with Moscow on the purchase of Russian military equipment, namely Sukhoi jets.

The chief of the federal service for military-technical cooperation, Dmitry Shugayev, said on Wednesday that Turkey has not addressed Russia with a formal request yet concerning the purchase of Sukhoi-57 jets, but consultations on the issue are already underway.

"There have been no requests for Sukhoi-57s yet, so it is premature to speculate about any concrete talks," he told the media.

At the same time he added that "consultations are already in progress on the Sukhoi-35 and Sukhoi-57".