TEHRAN (defapress)- Tens of military trucks carrying military equipment were dispatched by the US to Ain al-Assad military base in al-Anbar Province in Western Iraq from Jordan, Iraqi sources said.
News ID: 78617 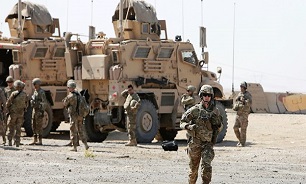 The Arabic-language al-Ma’aloumeh news website quoted a military source in the command center of Hashd al-Sha’abi (Iraq’s Popular Mobilization) forces as saying that a US military convoy comprising 108 trucks carrying military vehicles and equipment entered Ein al-Assad Air Base of Western Iraq from the neighboring Jordan via Erbil border crossing.

The source underlined that the US military convoy was accompanied by a security company called ‘Peacock Kingdom’ and backed by the US Air Force.

It pointed to the dispatch of military equipment to Ein al-Assad Base by the security companies, and said that the US soldiers are also dispatched to Ein al-Assad military air base on US Army airplanes.

In a relevant development last week, a senior member of Iraq’s al-Nujaba Movement underlined that the US special forces have increased their movements in Western Iraq, and relocated large groups of the ISIL terrorists.

The Arabic-language al-Mosleh news website quoted member of the Political Council of al-Nujaba Movement Faras al-Yasser as saying that according to the intel obtained by Hashd al-Sha’abi forces, the US forces have relocated the ISIL terrorists in heliborne operations to regions both in and outside Iraq to use them as pressure leverage against the Iraqi government.

Al-Yasser also pointed to the US’ efforts to increase the number of its army troops in Iraq, and said that the US special forces are present in the liberated areas in Salahuddin, al-Anbar and border regions.

He noted that suspicious movements continue by the US Army troops in Western Mosul and regions in the city of al-Sharqat.