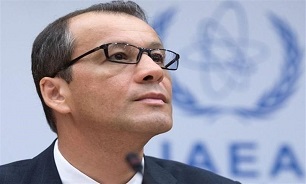 Director-General Cornel Feruta “will travel to Tehran on Saturday for meetings with high-level Iranian officials on Sunday,” the spokesman said on Friday.

“The visit is part of ongoing interactions between the IAEA and Iran.” This included “the IAEA’s verification and monitoring in Iran under the Joint Comprehensive Plan of Action (JCPOA),” he added, Reuters reported.

The trip comes before a quarterly meeting of the IAEA’s 35-nation Board of Governors next week.

Behrouz Kamalvandi, spokesman for the Atomic Energy Organization of Iran (AEOI), on Saturday announced details of the third round of cuts in nuclear commitments under the JCPOA, which Iranian President Hassan Rouhani announced on Wednesday.

The first phase started on May 8 and the second phase on July 7. Tehran has rowed back on its nuclear commitments twice in compliance with articles 26 and 36 of the 2015 deal, known as the Joint Comprehensive Plan of Action (JCPOA).

Iran maintains that all the measures are reversible, provided that the other parties fulfill their commitments.