Turkey May Buy Patriots from US 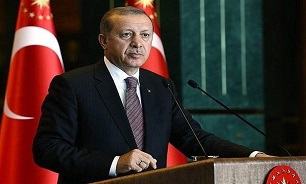 "I said no matter what package of ... S-400s we get, we can buy from you a certain amount of Patriots," President Recep Tayyip Erdogan told the Reuters news agency in an interview in Istanbul.

"But I said we have to see conditions that at least match up to the S-400s," added Erdogan, Anadolu Agency reported.

Erdogan had earlier talked about buying Patriots with US President Donald Trump in a telephone call and the two will discuss the issue in more detail at the UN General Assembly meetings in New York later this month.

"In my opinion a country like the US will not want to hurt its ally Turkey any more. This is not a rational behavior," Erdogan said, who expressed hope that his personal bond with Trump would overcome the current crisis between two countries.

Underlining that Trump blames the Obama administration for refusal to sign a deal with Turkey to sell the Patriot missile system, Erdogan said: “It is impossible to think that threats of sanctions reflect reality.”

He also reiterated that Turkey would take care of itself if Washington continued its current stance on Turkey's exclusion from the F-35 fighter jet program.

In July, the US suspended Turkey’s involvement in a program for F-35 fighter jets, saying its purchase of the Russian S-400 missile defense program could endanger the aircraft, a claim Turkey has consistently denied.

Turkey produces some parts of the F-35 jets and is a partner in the jet program. It has warned any effort to remove it from the production chain would be very costly.