Yemeni Attack on Saudi Oil Center Was a Warning

TEHRAN (defapress) – Iran’s president dismissed the allegation of Tehran’s involvement in the recent strikes on Saudi oil facilities, saying the attacks that Yemen launched on an industrial center --not a hospital or school-- carried a warning to the warmongers to end the war in the region.
News ID: 78728 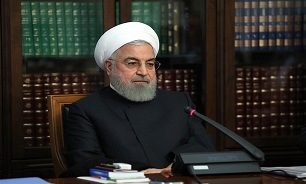 Addressing a weekly cabinet session in Tehran on Wednesday, Hassan Rouhani lashed out at the supporters of the Saudi-led military coalition for delivering “gunpowder” to the region, refusing to help the regional nations, and leveling accusations against others.

Nobody would believe the allegation that Iran has had a role in the attacks on Saudi oil facilities, he underlined.

“The Yemenis did not hit a school, a hospital or a market, but attacked an industrial center to warn their enemies,” Rouhani said, advising the enemies of the region to learn lessons from that warning and try to put out the flames of war in the region, so that people could enjoy freedom and welfare.

He said the US has adopted the policy of warmongering towards the Middle East and brought about insecurity wherever it has been involved, including Iraq, Afghanistan, Syria and the Persian Gulf region.

“We should know that the Yemeni nation has not started the clashes, rather, it was Saudi Arabia, the UAE, the Americans, a number of European countries, and the Zionist regime that have waged war in the region and devastated Yemen,” the president stated.

The enemies have to admit that the regional nations are powerful and should move towards peace and calm, Rouhani added.

“The Islamic Republic of Iran looks for friendly ties with its southern neighbors in the same way that it has friendly, brotherly and cordial relations with all neighbors in the north, east and west,” he said.

The enemies of the region are making false allegations against Iran instead of admitting that Lebanon’s Hezbollah has great scientific and military capabilities, that the Iraqi young forces have formed Hashd al-Shaabi to force out the terrorists and liberate Iraq’s northern cities, or that the Syrian and Yemeni nations have grown and gained power, Rouhani stated.

The Iranian president further reminded the US that it is impossible to pursue negotiations and maintain pressures on Iran at the same time, saying the US officials must end the cruel pressures on the Iranian people to prove their sincerity and repentance.

In remarks on Tuesday, Leader of the Islamic Revolution Ayatollah Seyed Ali Khamenei slammed the US’ bid for talks with Iran as a trick, stressing that Iranian and US officials will not hold negotiations whatsoever, either in New York or anywhere else.

The US objective behind negotiations is not finding a fair solution, but to impose its rude demands, Ayatollah Khamenei warned, saying the American authorities have become so rude that they openly admit to pursuing the purpose of “imposition” behind the push for talks.

“If the US backs off from its call, repents, and returns to the nuclear treaty it has breached, then it will be able to join the gathering of the parties to the deal (JCPOA) who hold meetings and talk with Iran, otherwise no negotiations will take place between the officials of the Islamic Republic and the Americans at any level, not in New York and not anywhere else,” Ayatollah Khamenei stressed.