TEHRAN (defapress)- Iranian Parliament Speaker Ali Larijani said on Sunday that while Tehran is concerned about the interests of the region, Tel Aviv is acting as the main enemy of the countries of the Middle East.
News ID: 78777 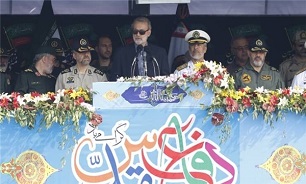 “The Islamic Republic of Iran is a friend and brother of all regional countries while the Zionist regime is a major enemy of Muslims,” Larijani said this morning, addressing the massive military parade in Bandar Abbas which along with parades across the nation mark the start of the Sacred Defense Week.

"We know that our main duty today is to defend the oppressed Palestinian nation," said the top lawmaker.

He said the Iranian Armed Forces have blinded and defeated terrorists and beaten the ISIL in the region by supporting the Iraqi and Syrian nations.

Larijani added, "Our country's military forces, who have proven their worth in the Sacred Defense, have their places at the heart of the Iranian nation."

Earlier this month, Iran’s Interior Minister Abdolreza Rahmani Fazli said that Washington, Tel Aviv, and a few other countries are the main sponsors of terrorism, extremism and violence in the region, adding that the US is following no objective but to sow discord among the countries of the region.

Some days later, Iranian Ambassador and Permanent Representative to the International Organizations Kazzem Qaribabadi condemned the UAE and Israel for their ridiculous allegations against Iran's nuclear activities.

"It is quite ridiculous that a regime which has ignored all the non-proliferation and disarmament commitments and developed all kinds of weapons of mass destruction is preaching a member of the Non-Proliferation Treaty (NPT) whose nuclear facilities and materials are under the IAEA’s safeguards,” Qaribabadi said.

“The Zionist regime, with its long history of (adopting) opportunistic policies to deflect attentions from its brutal and inhumane measures against the people of Palestine and other countries in the Middle East, has been one of the main sources of crisis, instability, pain, and anger in the region’s recent history,” he added.

Qaribabadi called on the international community not to be distracted from the Israeli regime’s atomic weapons program, and said that Tel Aviv must abandon its nukes and join the NPT immediately, putting all its nuclear facilities under the IAEA’s safeguards.