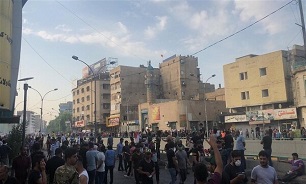 “Foreign evil hands which have been behind making Iraq insecure for years, are now seeking to destabilize Iraq in another way. While considering civil demands, it is Zionists & Takfiri terrorists' supporters who are behind recent developments in Iraq,” Amir-Abdollahian tweeted on Friday.

He went on to say that “This plot will also be foiled.”

During the last few days, sporadic protests have erupted across the country against alleged corruption.

The unrest comes as millions of pilgrims are preparing to travel to the Iraqi holy cities of Najaf and Karbala to attend the great March of Arbaeen which marks the fortieth day after the martyrdom of third Shia Imam, Hussein ibn Ali (PBUH).

"The enemy is now determined against the Islamic nation. America and Zionism ... are targeting Arba'een and Iraq, and causing trouble because it is hard for them to accept the presence of millions (of pilgrims) in Karbala," Ayatollah Mohammad Emami-Kashani said yesterday during Tehran’s Friday prayers sermon.