US Sanctions on Iran Crime against Humanity: President Rouhani

TEHRAN (defapress) – Iranian President Hassan Rouhani decried the US sanctions on Iran’s people as a crime against humanity and an act of economic terrorism, saying the Islamic Republic is moving towards full self-sufficiency despite the pressures.
News ID: 78940 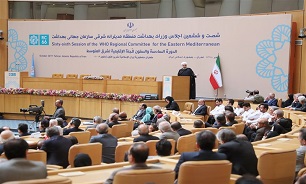 The US has committed crimes against humanity and taken an act of economic terrorism by imposing sanctions on Iran, Rouhani said in an address to the 66th session of the WHO Regional Committee for the Eastern Mediterranean, held in Tehran on Tuesday.

Taking a swipe at Washington for withdrawing from the 2015 nuclear deal under the pressure of hardliners, the Zionist regime of Israel, and Saudi Arabia, the president said what is more shameful is that the US imposed sanctions on the delivery of foodstuff and medicine to the Iranian people.

He further stressed that the US economic terrorism has failed to bring the Iranian nation to its knees, adding that Iranian scientists, researchers and entrepreneurs have doubled their efforts in spite of the unprecedented economic pressures and unfair sanctions from the US.

“Today, we are moving towards full self-sufficiency,” he added.

The president explained that more than 95 percent of the pharmaceuticals needed in Iran are being produced inside the country.

A few days ago, Iranian Health Minister Saeed Namaki said the country is exporting pharmaceuticals to countries in Europe, Africa and Central Asia.

In comments last month, the secretary of Biotechnology Development Headquarter at the Iranian Vice-Presidency for Science and Technology said Iran is exporting biopharmaceuticals to several regional and overseas countries, unveiling plans to increase export revenue generated by the knowledge-based companies.