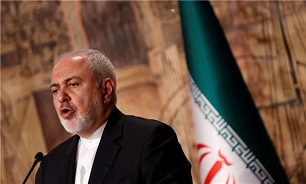 In a post on his official Twitter account late on Sunday, Zarif lashed out at the United States for pursuing double standards toward the Islamic Republic, saying new regulations adopted by the White House would only worsen economic terrorism targeting the Iranian people.

His remarks came after the US Treasury Department announced on Friday that it had decided to facilitate sales of food and medicine to Iran.

The department said it had created a new humanitarian mechanism to ensure shipments of food and medicine can continue to be delivered to Iran, adding it would allow "permissible trade" to support the Iranian people while maintaining its “maximum pressure” policy against the Iranian government.

The Iranian foreign minister pointed to earlier claims by US Secretary of State Mike Pompeo, who said in November last year that it is in Iran's best interests to toe the line and listen to Washington or else its people will pay the price.

“Secretary Pompeo voiced his delusion that Iranian people must bow to US ‘if they want to eat’. Now, US Treasury is targeting not merely food but also our imports of medicine,” the top Iranian diplomat said.

Pompeo told BBC Persian that Iranian officials have to “make a decision that they want their people to eat”.

Later in January, the US secretary of state said Washington’s tough sanctions against the Islamic Republic were aimed at giving the Iranian people a chance to have better lives.

"The sanctions on Iran have this ultimate goal: creating an outcome where the Iranian people can have better lives than they have today," Pompeo told Newsmax TV.

In a meeting with UN Secretary General Antonio Guterres on the sidelines of the 74th session of the General Assembly in New York in September, Iran’s President Hassan Rouhani slammed the United Nations for keeping mum on the crimes the US has been committing against the Iranian nation through the economic terrorism campaign, calling on the world body to break the silence and shoulder its responsibilities.

Referring to Washington’s harsh campaign of economic pressure and sanctions against the Islamic Republic, the president said “an aggressor government is committing all these crimes against an entire nation, while the UN has remained tight-lipped.” He added that this “shame will remain in history.”

Former sanctions expert and Iran nuclear negotiator at the US State Department Richard Nephew said, in a tweet on Friday, that the new US humanitarian mechanism to ensure transparency into humanitarian trade with Iran was nothing more than a trap that would help Washington to identify people dealing with the country and impose sanctions on them.

“I suspect most will see this mechanism less as a humanitarian channel and more as an intelligence gathering function to enable additional US sanctions,” said Nephew, adding, “For those of us seeking a real channel, this ain’t it.”

That would enable them to seek the consent of Treasury and State whether their actions do comply with the American sanctions.

Experts believe the new measure, which comes under Section 311 of the USA PATRIOT Act, would force the banks and institutions, particularly those in Europe, to terminate their trade of food and medicine with Iran out of fears that they would be blacklisted by the US

Tyler Cullis, an attorney who specializes in sanctions law with Ferrari & Associates, told the news and analysis website Al-Monitor that banks would prefer to end their relations with Iran altogether rather than reporting to the US authorities that they maintain accounts for or on behalf of Iranian financial institutions.

“Not a single banker in the world will look at that and say, ‘yeah, we will do that.’ Not a single one,” said Cullis, adding that Swiss banks have already informed Treasury that they will close the accounts of the Iranian banks they use for humanitarian trade if Washington goes forward with the Section 311 ruling.

A former official at Treasury Department’s Office of Foreign Assets Control, the body that does bulk of the work on sanctions targeting Iran, said Washington’s alleged attempt to increase transparency in humanitarian trade with Iran would only incriminate more people in the framework of the sanctions imposed on the country.

“This does not help, and in fact probably makes the situation worse,” said Brian O’Toole in a tweet, adding, “It’s like they’re trying to force Europe to scream and pound the table.”