US-Saudi Plots against Iraq, Lebanon to Fruit Nothing

TEHRAN (defapress)- Senior Advisor to the Iranian Parliament Speaker Hossein Amir Abdollahian lashed out at Washington and Riyadh for jointly organizing conspiracies against Baghdad and Beirut, reassuring the two supporters of unrests that their plots in Iraq and Lebanon are doomed to failure.
News ID: 79133 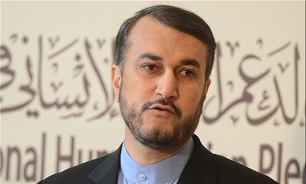 “Before, the United States and Saudi Arabia, by taking advantage of the people’s demands, forced the Yemeni prime minister into resigning in a bid to dismantle the government in Yemen, which they failed,” Amir Abdollahian said in a tweet on Tuesday, in reaction to the recent spate of unrest in Iraq and Lebanon.

“Now, they have launched a project to dismantle the governments in Iraq and Lebanon and create chaos,” he noted, adding that “no doubt, this version of ‘political terrorism’, too, will fail.”

On Friday, Amir Abdollahian blasted the US, Israel and Saudi Arabia for interfering in other countries' internal affairs, and said they are fomenting unrest in Iraq.

"By taking advantage of the actual demands of Iraqi people and by using Ba’athists and insiders, the United States, Israel and Saudi Arabia are planning to create insecurity and instability, overthrow the people-elected government, and provide the condition for foreign interference,” Amir Abdollahian tweeted.

“The solution is to pay serious attention to the livelihood requirements of the Iraqi people and the immediate withdrawal of American troops,” he added.

In a relevant development last Monday, a ranking legislator said that the Iranian parliament highly values regional cooperation as the only way forward to overcome problems, adding that there is no need for interference and presence of external forces in the region.

“The problems in the region are the result of foreign interference,” Kamal Dehqani, a senior member of the Iranian Parliament’s National Security and Foreign Policy Commission, said.

The senior Iranian lawmaker reiterated that the regional countries can work together to resolve the problems, and said, “The presence of foreigners has not only caused problems, but has also exacerbated them.”

Kamal Dehqani, meantime, pointed to Iran’s preparedness to confront the potential threats, and said, “Iran has influence in the region which is something strongly opposed by the enemies.”

The senior lawmaker reiterated that the regional allies of big powers should come to realize the negative consequences of the policy of dependence on the US and Israel.