TEHRAN (defapress) – The US imposed sanctions on the Iranian minister of information for his role in what it described as “widescale internet censorship” during the recent wave of foreign-backed riots that hit a number of cities as a result of fuel price hikes.
News ID: 79302 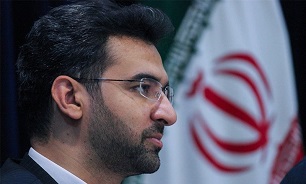 Azari Jahromi has advanced Tehran’s policy of “internet censorship” while in office, US Treasury Secretary Steven Mnuchin said in a statement on Friday, Reuters reported.

“We are sanctioning Iran’s Minister of Information and Communications Technology (ICT) for restricting internet access, including to popular messaging applications that help tens of millions of Iranians stay connected to each other and the outside world,” he added.

The sanctions block any Azari Jahromi property under US jurisdiction, the Treasury Department further said, saying its regulations generally bar dealings by US persons, or those transiting the United States, in such property.

“I’m not the only member of the club of sanctioned persons (Based on Trump’s fairytales). Before me, Iran ICT startups, Developers, Cancer patients, and EB children were there. I’ll continue advocating access to Internet & I won’t let US prohibit Iran development.#EconomicTerrorism,” Azari Jahromi tweeted after the announcement.

The sanctions on Azari Jahromi came a day after US Secretary of State Mike Pompeo threatened to impose even more embargos on Iran over the country’s handling of the recent riots, even though the unrest is believed to be the result of Washington’s unilateral sanctions.

In meddlesome comments on Thursday, Pompeo urged Iranians to send photos and other information documenting what he called “repression,” while vowing to sanction "abuses" by the Iranian government.

Iran's President Hassan Rouhani on Wednesday hailed the people’s firm response to the recent wave of foreign-backed riots that hit several Iranian cities, voicing gratitude towards the nation for withstanding the enemies’ subversive plots despite their economic grievances.