TEHRAN (defapress) – China accused the UN high commissioner for human rights of emboldening “radical violence” in Hong Kong by suggesting the city’s leader conduct an investigation into reports of excessive use of force by police.
News ID: 79440 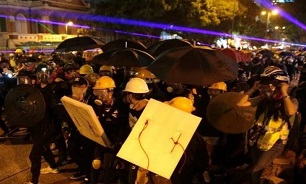 The back and forth came ahead of three marches on Sunday in the semi-autonomous Chinese territory.

She urged Lam to hold an “independent and impartial judge-led investigation” into police conduct of protests. It has been one of key demands of pro-democracy demonstrations that have roiled the territory since June.

China’s UN mission in Geneva said that Bachelet’s article interferes in the internal affairs of China and exerts pressure on the city’s government and police, which “will only embolden the rioters to conduct more severe radical violence.”

It said Bachelet made “inappropriate comments” on the situation in Hong Kong and that the Chinese side had lodged a strong protest in response, AP reported.