TEHRAN (defapress)- Commander of the Islamic Revolution Guards Corps (IRGC) Aerospace Force Brigadier General Amir Ali Hajizadeh highlighted that his country’s indigenized production of defensive systems and equipment has turned it a leading manufacturer of the field in the world.
News ID: 79554 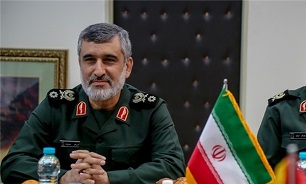 Across many areas, the world’s state-of-the-art technology has been indigenized by the agency of Iran’s capable defensive technologists, said Brigadier General Hajizadeh on Thursday.

He was addressing a plenary meeting of the commanders and senior officers of the IRGC’s Khatam al-Anbiya Construction Headquarters, an engineering hub.

He added the Islamic Republic’s defensive systems and equipment boast a thoroughly indigenous production process, noting that the military hardware's quality has turned the country into one of the world’s defense technology leaders.

Had it not been for the Headquarters’ now-30-year-old services, sanctions employed against the country would have come to inflict considerable damage on its various industrial, energy, and economic sectors, he said.

“Thanks to the diligence exercised at the Headquarters, not only have many of the oppressive sanctions been rendered ineffective, but also they have been turned into an opportunity for growth and fruition of the country’s domestic capability and capacity,” the commander hailed.

The Headquarters has been contributing heavily to Iran’s industrial and economic spheres, including by playing a significant role in its efforts to exploit its oil wealth.

In February, the country opened the third phase of its Persian Gulf Star Refinery, where the Headquarters has been contributing to construction efforts. The development marked the country’s self-sufficiency in gasoline production with a total output standing at more than 100 million liters per day.

Ever since the victory of Iran’s Islamic Revolution in 1979, the United States and its allies have been taking the country under indiscriminate economic and trade sanctions.

The US lifted the nuclear-related ones among the bans after conclusion of a multi-national nuclear accord between Iran and world powers in 2015. Last year, however, it unilaterally and illegally left the deal and returned the sanctions.

Tehran has denounced Washington’s violations as “economic terrorism,” but has vowed to defy the measures, continue to harvest and sell crude, and not join any new negotiation unless the bans are removed.

In September, Brigadier General Hajizadeh said that Iran is among the top 5 countries of the world with superior technology for manufacturing drones.

“Today, 40 years after the victory of the Islamic Revolution we are witnessing hugs advancements in different areas and now we are among the top 5 countries of the world which possess the technology for manufacturing advanced Unmanned Aerial Vehicles (UAV),” he added.

A week before that, India’s Defense Minister Rajnath Singh, in a meeting with Iranian Ambassador to India Ali Chegeni, reiterated that New Delhi is determined to further expand defense and military cooperation with Tehran.

Referring to the historical and friendly relations between Iran and India, Singh welcomed promotion of defense relationships, specially in the fields of defensive science and education, exchange of experiences and information on counterterrorism, piracy and rescue in the Persian Gulf and the Indian Ocean, as well as exchange of delegations at various levels.

Late in July, reports emerged that India was impressed by Iran’s defensive capabilities which led to the downing of an American spy drone in the Strait of Hormuz.

Downing of the US Global Hawk drone by Iran in the Persian Gulf prompted a rethink within the Indian military establishment, led by the air force, over the acquisition of American-made armed drones on account of their cost and questions over their survivability.

India’s three services had planned to buy 30 drones from the United States at a cost of $6 billion. The plans were for the air force and the army to acquire 10 Predator-B drones each and the navy to buy long-distance surveillance versions.