US Power Declining in World

TEHRAN (defapress)- Supreme Leader of the Islamic Revolution Ayatollah Seyed Ali Khamenei blasted United States President Donald Trump for meddling in other countries’ internal affairs, and said that the US power is on decline as unilateral approaches are no longer effective.
News ID: 79596 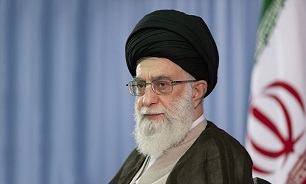 “The US is declining and any power that is based on domination and interference in other countries’ affairs will not persist,” Ayatollah Khamenei’s official Twitter wrote on Monday.

Ayatollah Khamenei's remarks were published in several posts on his official Twitter accounts in English and French marking the anniversary of the conviction of the deceased French philosopher Roger Garaudy at a court in Paris for questioning the Holocaust.

In his book, The Founding Myths of Modern Israel, Garaudy asserted that the allegation about “six million" Jews having been perished through the Holocaust was a myth, prompting the French judicial system to ban any further publication of his book and fining him 240,000 French francs on February 27, 1998.

“#RogerGaraudy has an accurate and precise prediction about the US regime, which we confirm, too,” the Supreme Leader tweeted.

“We also believe that the US is declining. A power built on the basis of coercion, interference in other countries’ affairs and domination over other nations won’t persist.”

Ayatollah Khamenei also took a jab at the Western countries' claims to being advocates of freedom of speech by bringing up Garaudy’s case, who was also given a suspended prison term of several years for denying the Holocaust.

The Supreme Leader noted that in response to Garaudy’s academic criticism of the Holocaust, instead of giving convincing answers or allowing unbiased research, “the French govt. not only banned his book, but also brought Garaudy to trial”.

“These are the claimants of advocating #FreedomOfSpeech,” Ayatollah Khamenei added.

Garaudy was a French philosopher, resistance fighter and a prominent author who was convicted and fined in 1998 for Holocaust denial under French law.