TEHRAN (defapress) – Iran's Ambassador to the United Nations Majid Takht-Ravanchi said that the United States has ignited a military war that will be responded by Iran's military action.
News ID: 79781 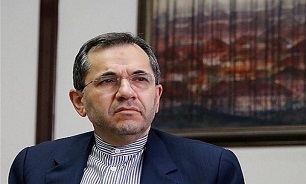 “The US started the economic war in May 2018 and last night they started a military war by an act of terror against one of our top generals,” the envoy told CNN on Saturday.

He highlighted that Iran cannot remain silent, adding, “we have to act and we will act.”