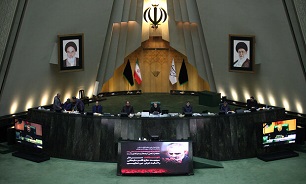 Speaking at the Parliament session on Sunday, Speaker Ali Larijani described the US’ assassination of IRGC’s Quds Force commander, Lt. Gen. Qasem Soleimani as a “barbaric” move by US President Trump and a “terrorist, military operation.”

“You have endangered the security of the region by doing this and must be held accountable,” Larijani addressed the US.

“Your stupidity has endangered the lives of the Americans present in this very vast region,” he added.

The United States terrorist forces assassinated Lt. General Soleimani and Abu Mahdi al-Muhandis, the second-in-command of Iraq’s pro-government Popular Mobilization Units (PMU) — better known as Hashd al-Sha’abi — in an airstrike at Baghdad’s international airport early on Friday. The Pentagon said in a statement that US President Donald Trump had ordered the attack.

“The American officials said in a panic that the assassination was a preemptive move,” Larijani said. “They said Gen. Soleimani was planning to carry out moves against US forces in Syria, Lebanon, and Iraq. This is an utterly baseless claim.”

“The American people and the House of Representatives should know that the US president’s claim is a lie to drag on a war and terrorist crime. He intends to deceive. If they had evidence, why didn't they make it public?”

Larijani also described the US’ terrorist assault as a total disrespect to the Iraqi people.

“Before anything, you’d better hold onto your hats and run!” Larijani added, stressing that Iran would give a harsh response to those making a move against the country's national dignity.